Titanic at Your Library

As you're probably aware, the 100th anniversary of the sinking of the Titanic is coming up this April. Kids are fascinated with the Titanic, so you'll want to make sure you've stocked your shelves well with titles like Unsinkable (and sequels) by Gordon Korman, Titanic Sinks! by Barry Denenberg, and The Watch That Ends the Night by Allan Wolf. (Of course, don't forget Blizzard of Glass by Sally M. Walker, which is not about the Titanic, but makes a great readalike for interested tweens!)

And if you're wanting to do a library program about the Titanic, look no further! Here's a rerun from the Abby the Librarian archives with a Titanic program I did a couple of summers ago. This post originally ran on June 24, 2010.

When we were brainstorming for summer programs to go along with the Make a Splash theme, I thought to myself "What made a bigger splash than the Titanic?"

Irreverent, I know, but kids are fascinated by that great ship and I wanted to come up with a program to bring in some of those older kids. So, what did I do? 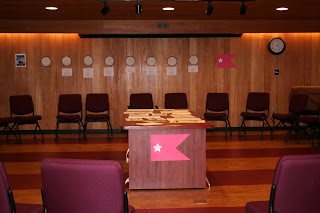 First, I set up the room. I put chairs in a big circle and printed out a bunch of historic newspaper articles from when the event happened (I took advantage of our Indiana room for these and I found many images online that I printed out). On the wall, I put up a time line detailing some important dates and times of the events (when the ship set out, when she struck the iceberg, when the Carpathiaarrived to pick up survivors, etc.). And I made some paper flags to look like the White Star Line flags. I also used some blank labels to make name tags with the White Star Line logo on them.

When the kids arrived, I let them in the room and gave them some time to look over the newspaper articles while we waited for everyone to show up. While they were checking out the articles, I had music playing from Titanic: Music as Heard on the Fateful Voyage. 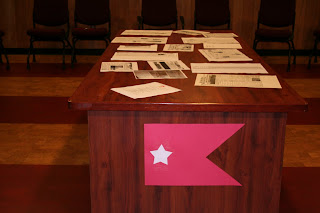 Once most of the kids had shown up, I started with a brief overview of the Titanic.I invited the kids to share what they knew about the event and they were so into that. It was hard to get them to stop talking! But eventually we moved on and I asked them some trivia questions I had put together.

The trivia was my favorite part of the program. I used the book 882 1/2 Amazing Answers to Your Questions About the Titanic and the Magic Tree House Research Guide: Titanic to find many of the questions I asked and fun facts I told the kids. Another great resource for Titanic information is the website Encyclopedia Titanica.

After that, I brought out the mini iceberg I had made. I froze baggies of water and then froze them together to form a huge chunk of ice. I floated this in a clear container (with some blue food coloring in the water) to show them how you can only see a tiny bit of the ice when there's much more under the surface. Since they were being very well-behaved, I also invited them to feel how cold the water was and imagine being submerged in water that cold while they waited for rescue.

If you do something like this, have plenty of towels around to clean up spills and for kids to dry their hands! Also, get some gloves for when you're handling the ice. It's cold. And also sharp. Safety first! 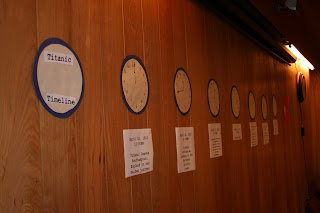 Then I read a passage written by a Titanic survivor.

After the iceberg, I talked to them a little about Morse code and demonstrated it with a flashlight. I chose a volunteer to spell out his name with the flashlight. This went okay, but not great. I wanted to do something with Morse code, but I couldn't come up with something better. 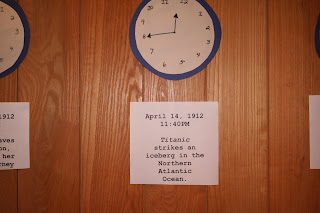 And then since they had been sitting for sooo long, we played musical chairs with the 1912 music from the CD I had. This was a big hit, but took longer than I thought since we had a good crowd of kids.

After we had gotten through musical chairs, we ended and I handed out packets with some activities (a Titanic word search, a Morse code activity, and a book list of Titanic books and survival/adventure books). The website History on the Net has a lot of Titanic worksheets that are free for educational use. Of course, I had put up a Titanic book display and the kids ravaged it, taking almost every book I put out. 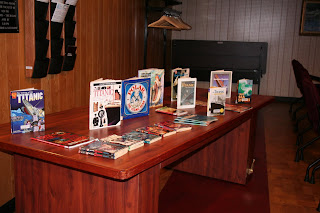 The program was a lot of fun and we had great attendance. We limited the program to kids going into 3rd-5th grade and it attracted a lot of boys, which was exactly the audience I had hoped it would attract!