Audiobook Review: The Probability of Miracles 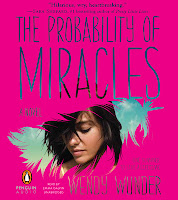 The Probability of Miracles by Wendy Wunder, read by Emma Galvin. Grades 8 and up. Penguin Audiobooks, December 2011. 8 hours and 7 minutes. Review copy provided by publisher.

Sixteen-year-old Campbell is dying. Yup, she's got cancer. Treatments aren't working. Cam's kinda resigned herself to it, which is why she's created the Flamingo List, a list of things she wants to do before she dies. Y'know, normal teenager things like "Sleep through Saturday" and "Have my heart broken by an asshole". When her mom decides they're moving from Orlando to a tiny town called Promise, Maine, where it's said that miracles are known to occur, Cam's skeptical. But what she discovers in Promise (besides a dreamy boy named Asher who seems to care about her) is how to get busy living instead of dying.

Miracles. They come in many shapes and sizes. Cam's mom is hoping that this mystical town with purple dandelions and synchronized whales leaping out of the ocean will be able to heal her daughter. But maybe a smaller miracle would do... like a dying girl making the most of of the weeks and months she has left.

Cam has a great voice and this is where it was really nice to listen to this book because I think Emma Galvin does a really nice job of bringing Cam's voice to life. The performance is not voiced, but it's a nice, solid read with a timbre that fit well with Cam's personality. Ms. Galvin's reading voice is a little bit husky and it reminded me of no one more than Emma Stone, which worked for me because Cam's not your typical girly girl. She's frank and adventurous. She's cynical and she puts up a brave front, while on the inside she's very unsure.

Cam's sarcasm and dry humor keeps the book from being depressing. Yes, it's a book about a girl dying, but really it's about a girl living. The town of Promise has a mystical quality about it, almost verging into magical realism (depending on whether you believe in miracles or you don't).

I'd hand this book to teens who have enjoyed books like Before I Die by Jenny Downham or Forever Changes by Brendan Halpin. I'd recommend the audiobook to those who have enjoyed solid, character-based recordings like Speak by Laurie Halse Anderson, read by Mandy Siegfried or Story of a Girl, written and read by Sara Zarr.

The Probability of Miracles is a very strong debut and I'll certainly be looking for more from Wendy Wunder. Read more reviews of the book at GreenBean TeenQueen and YA Librarian Tales.

The Probability of Miracles is on shelves now!

Hey, I'm an Audible affiliate, so if you click on the links here and make a purchase, I get a small commission.
Abby at 11:07 AM
Share
‹
›
Home
View web version