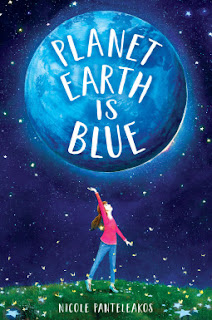 It's 1986 and Nova has just been placed in a new foster home, a home without her older sister for the first time, and Nova is devastated. Her sister said she'd always be there for her, which is especially important to Nova because Nova has autism and she is almost completely nonvocal. Bridget was the one person who could always understand her and who knew that Nova understands more than anyone gives her credit for. Nova can read, she knows the alphabet, she knows what's going on around her, but since she mostly doesn't speak, most adults in her life assume that she's developmentally delayed.

Nova is obsessed with space and right now she's particularly obsessed with the upcoming Challenger launch - the chance to see a teacher in space for the first time. Her sister Bridget has promised to come back for the launch, so they can watch it together. As the days count down and the launch gets closer and closer, Nova starts to get nervous that Bridget won't keep her promise.

Written partly in the third person and partly in first person as Nova writes letters to her missing sister, this is a book that will have you feeling all the feels.


My thoughts:  Readers who like to feel ALL THE FEELS need look no further. This book absolutely broke my heart. All I could do after I finished it was sit in the dark and listen to "Space Oddity" by David Bowie on repeat. Okay, that's maybe a little dramatic. But seriously. The feels. The title of this book and the heavy referrals to Nova's favorite song are so apropos because the way that song makes me feel is exactly how this book made me feel.

I kind of feel like this book is a love letter to what foster families and special education teachers can be, too. It's set in a time when our understanding of autism was much different than it is today. Nova's unfortunately used to being shuffled around since her mentally ill mother lost custody of the girls when Nova was little. But this new foster family is the first family that begins to really understand Nova and learns how she communicates. They know she loves space and enroll her in an astronomy class at school, they put her in a school with a good special ed program and teachers that begin to reach her in a way no teachers have before.

The book picks up speed as it goes along and the countdown to the Challenger space shuttle disaster gets closer and closer. Of course we know what's going to happen, we know it's not going to be good. I do kind of wonder if middle grade readers will be familiar with what happened at the Challenger launch - you might want to make sure before you hand this to kids or else the ending could be pretty devastating.

Readers who like Sharon Draper's Out of My Mind (Atheneum, 2010) for its glimpse inside the mind of a nonvocal child with disabilities will love Nova's story, as well; particularly the parts written from Nova's point of view.

Ann M. Martin's Rain Reign (Feiwel & Friends, 2014) is another heartfelt story about kids on the autism spectrum who face really hard things in their lives.

The quest for understanding and for people in their lives who will communicate with them on their own terms is also a strong theme in Song for a Whale by Lynne Kelly (Delacorte Press, 2019). Twelve-year-old Iris is Deaf and goes to a mainstream school where many people assume she's not smart or struggle to communicate with her.
Abby at 7:11 AM
Share