#MiddleGradeMay: Pie in the Sky 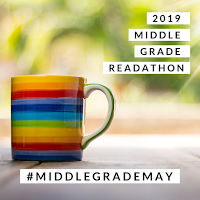 Jingwen feels like he's just landed on Mars when his plane touches down in Australia. There's only one English word he's really mastered - BOOGER - because his annoying little brother is a giant booger. School is a torture chamber where he's forced to repeat the fifth grade and still doesn't understand anything because everything is taught in English. He has no friends and he's afraid to try to talk to anyone since he probably won't be able to respond to them anyway.

The only thing that gets Jingwen through the day is what his brother calls CAKE TIME! Every afternoon after school when Jingwen's mother goes to work, Jingwen and Yanghao buy groceries and bake a cake from the menu of his father's dream bakery, Pie in the Sky. The bakery was his father's dream and he didn't live long enough to see it through, so Jingwen bakes the fancy cakes they would have had on the menu as a way to feel good about himself and feel connected to his father.

Of course the boys are NOT ALLOWED to use the oven when they're home alone and they could get into big trouble, so they have to keep their baking an absolute secret AND they must eat the entire cake every night. How long 'til Yanghao blows their secret? How long 'til eating all that cake makes one of them blow chunks? How long 'til Jingwen's longing to feel at home stops being just "pie in the sky" - an impossible dream?

This is a pitch-perfect story that explores how tough moving to a new place and learning a new language can be. Jingwen spends hours and hours on his homework even though he's repeating the fifth grade. He knows the answers if he can understand the questions, but understanding the questions is the tough part. Throughout the book, Jingwen talks about seashells - seashells that he collected and asked his mother to hold for him, even though it weighed down her pockets. They come to represent Jingwen's feelings of guilt over his father's death.

The cartoon illustrations add so much to the book - Remy Lai uses gibberish symbols to show how English sounds like an alien language to Jingwen. His frustration is compounded by how easily his younger brother is picking up the language. As we read, we begin to learn that it's not just a lack of practice that holds Jingwen back, but a refusal to accept his life in Australia and the fact that his father passed away and his feelings of guilt about his father's death.

And it's a story about brotherhood - Jingwen is the oldest and has to take care of his little brother, but he carries a lot of resentment. Yanghao is picking up the language more quickly and seems fearless about speaking it, not caring if he makes mistakes. Because Yanghao's more willing to try, he makes friends and succeeds in school where Jingwen lets his fear and embarrassment hold him back. It's hard to be the big brother caring for a younger brother who sometimes translates for you and can talk to the librarians to book a computer.

This is a book that's both salty and sweet, like the perfect salted caramel sauce.

The humor and graphic novel portions of this book make it a great read for fans of Diary of a Wimpy Kid or Big Nate, even though the subject matter carries more gravity than in those books.

New Kid by Jerry Craft is a full graphic novel and uses humor to explore a similar feeling of being a new kid and a kid who stands out from the other kids around you.

All Four Stars by Tara Dairman is another character-driven book for budding foodies about kids who love cooking but must keep their kitchen exploits a secret.