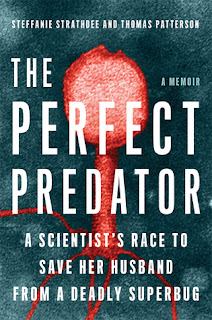 You all. This was a book that I COULDN'T PUT DOWN and that does not happen to me very much. I am a very distracted reader and I'm usually reading many books at the same time. I heard about this true medical thriller at the ALA Midwinter conference at one of the Book Buzz panels and they mentioned that it had been so popular that all their galleys were gone. I can definitely see why.

Steffanie Strathdee and her husband Tom Patterson were traveling in Egypt when Tom first got violently sick. After dealing with a poorly equipped hospital in Egypt and being medevacked to Germany, they figured out that he had contracted an infection from a superbug - a virulent drug-resistant bacteria. Tom kept getting worse and worse and doctors started to Steffanie her that there was nothing more that could be done. So epidemiologist Steffanie took matters into her own hands, researching phage therapy - treatment involving virus phages that attack bacteria. The treatment was not FDA approved and there was no guarantee that it would work, but they were desperate and ready to try anything... if they could get approval in time.

Not only is this a page-turning thriller that reads like the best episode of ER ever, it's written in a very relateable style and with lots of humorous moments. I enjoyed the writing as much as the subject matter. Strathdee has a talent for explaining a lot of complicated medical stuff in ways that make it easy to understand and engage with. I learned a ton and super enjoyed the reading experience.

It's definitely disturbing in parts and this book won't be for everybody - it's graphic in its descriptions of Tom's illness, hypochondriacs and the squeamish should stay away. Plus, the threat of drug-resistant bacteria is a very real threat that humans have created and ignored for so long that it's pretty scary.

Readalikes: Hand this one to readers who enjoyed the true medical drama Brain on Fire: My Month of Madness by Susannah Calahan. This is a similarly fast-paced medical mystery story dealing with unusual illness.

Of course one of the heavy hitters in the medical thriller genre is The Hot Zone: The Terrifying True Story of the Origins of the Ebola Virus by Richard Preston. Readers who enjoy the fast pace and gory details of The Hot Zone will also like The Perfect Predator.

And Steffanie Strathdee's talent in educating about medical topics like vaccines and microbiology in an engaging way reminded me a lot of another favorite science book, The Poisoner's Handbook: Murder and the Birth of Forensic Medicine in Jazz Age New York by Deborah Blum. Although it's a different type of medical topic, I think readers who are interested in engaging science writing will enjoy both books.

The Perfect Predator: A Scientist's Race to Save Her Husband from a Deadly Superbug by Steffanie Strathdee and Thomas Patterson. Adult. Hachette Book Group, February 2019. 304 pages. Reviewed from ARC received from publisher.
Abby at 7:11 AM
Share
‹
›
Home
View web version