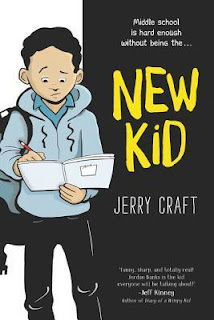 Jordan Banks loves art, but his parents refuse to send him to the art school he wants to go to. Instead, they enroll him at the prestigious private school Riverdale Academy Day School where Jordan turns out to be one of the few kids of color in his grade. His parents keep telling him that this school will help him learn how to navigate the world at large, and he's smart and can excel in a rigorous academic environment. But at this school Jordan has to deal with things like students AND teachers mixing his name up with the names of other African American students, getting stared at whenever teachers mention students on financial aid, and the only books the school librarian recommending to him being gritty tales of African American kids dealing with gang life or prison. It's hard enough to be the new kid in school without having to deal with all the microaggressions he gets every day.

Jordan's parents say that if he still doesn't want to go there by ninth grade, they'll let him go to art school, but can he survive until then?

This book had so many moments that tell it like it is. It's probably the best middle grade book at dealing with microaggressions that I've seen. It does not stray away from how uncomfortable it makes Jordan, even when his white classmates and teachers don't realize what they're doing.

This is a book that kids of color will identify with and that white kids need to read and talk about. And it's written in a fun way. Full-color panels illustrate Jordan's day to day life in school split up by black and white spreads from Jordan's sketchbook as he reflects on stuff that's happening to him at school. Each chapter is named and illustrated for a spoof on the media (example: Chapter 3: The Hungry Games: Stop Mocking J). A blurb from Jeff Kinney on the front cover does not lead readers astray - this is a funny story talking about serious stuff. Jerry Craft really uses humor to delve into heavy topics in a way that makes them approachable.

This is a must-purchase for your library shelves, especially if you have readers of contemporary realistic graphic novels.

Readalikes: I feel like most contemporary realistic graphic novels get compared to the powerhouse Smile by Raina Telgemeier, but I think it really is an apt comparison here. They're both loosely plotted, taking place over the course of a year or years, and both feature protagonists that are navigating the tricky waters of middle school while feeling different from everyone around them.

The theme of being one of few kids of color at a prestigious private school and dealing with microaggression after microaggression makes this a great readalike for Piecing Me Together by Renee Watson.

New Kid by Jerry Craft. Grades 4-8. HarperCollins, February 2019. 250 pages. Review copy provided by my local library.
Hey, I'm an IndieBound affiliate, which means that if you purchase books through the links on this site, you're not only supporting your favorite independent bookstore, you're supporting me, too!