Yes, yes, it's time for In My Mailbox, a weekly meme hosted by Kristi of The Story Siren!

Of course, the most wonderful thing I got in the mail this week was my new computer!!  Yes, I am back online and blogging this from the comfort of my own couch once again.  I'm still in mourning for my old computer, which died so very suddenly, but I'm moving on one step at a time. ;)

And books!  I got two books in the mail this week. 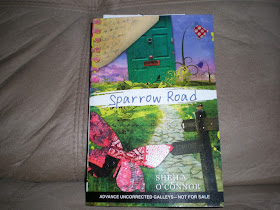 First, I received an ARC of Sparrow Road by Sheila O'Conner (G.P. Putnam's Sons, May 2011).  Here's the summary from the ARC:

It's the summer before seventh grade, and twelve-year-old Raine O'Rourke's mother suddenly takes a job hours from home at mysterious Sparrow Road - a creepy, dilapidated mansion that houses an eccentric group of artists.  While Raine's mother works as the cook and housekeeper, Raine explores the sprawling estate, trying to solve its secrets in the hopes that she'll discover why she and her mother have really come to Sparrow Road, but it's an unexpected secret from Raine's own life that changes her forever.

This book has blurbs from - wait for it - Newbery-honor-winning Gary D. Schmidt, Ann M. Martin, and Karen Cushman.  And it sounds like just the type of book I would have loooved when I was nine or ten. 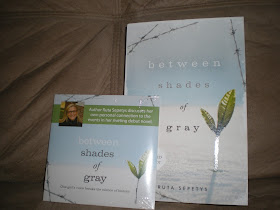 And I received an ARC of Between Shades of Gray by Ruta Septys (Philomel Books, March 2011).  Here's the summary from GoodReads:

In 1941, fifteen-year-old Lina, her mother, and brother are pulled from their Lithuanian home by Soviet guards and sent to Siberia, where her father is sentenced to death in a prison camp while she fights for her life, vowing to honor her family and the thousands like hers by burying her story in a jar on Lithuanian soil.

This is a 2011 debut and has blurbs from - wait for it - Laurie Halse Anderson, Richard Peck, and Susan Campbell Bartoletti.  World War II stuff is so, so popular with our teens, and this looks like a story that will be unlike anything out there.  Hurrah!
And that's it for my mailbox this week.  What books are you excited about this week?

PS: Want more books in your mailbox?  Don't forget to enter my giveaway for a signed copy of Love Drugged by James Klise!  I'm accepting entries from US residents through October 27.
Abby at 7:11 AM
Share
‹
›
Home
View web version