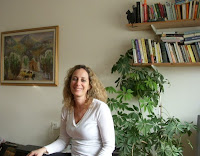 Anna Levine is the author of two books that won Sydney Taylor Book Awards this year. Her teen novel Freefall won the Sydney Taylor Honor Award for teen readers and her picture book Jodie's Hanukkah Dig was named a Notable Book for Younger Readers. The fantastic Ms. Levine was kind enough to answer some questions for me as part of the Sydney Taylor Book Award Blog Tour. You can even tell in this interview what a great storyteller she is, so if you haven't picked up Freefall, I don't know what you're waiting for!

One of the things I really love about FREEFALL is the juxtaposition between Aggie's "normal" teenage girl life (having crushes on boys, hanging out with her best friend, etc.) and her life in military training. Was one type of scene easier or more fun for you to write? If so, why?

There were so many scenes I loved writing it’s hard to choose. But if I have to choose one, well, the runner up is the scene where Aggie is in Noah’s room and she notices all the bits and pieces that make up his personality, from the oil rags on the floor used to clean his gun to the crumpled up pieces of paper on which I imagine he’s jotted down lines of a song. I loved capturing the juxtaposition of Noah as a regular guy who plays the guitar, reads the Beats, smells of shampoo, is a bit awkward around the girl he likes and all with a gun under his bed waiting for when he has to return to his base within 12, 24 or 48 hours.

But one of my favorite scenes is close to the end where Aggie is on the bus going back to Jerusalem from Nahariyah. Aggie is sitting next to a girl she doesn’t recognize, only to discover that it is the girl who was her commanding officer during boot camp. For me, this scene captures the double lives led by many Israeli youth. When in uniform they take on the responsibilities demanded of them. And when off duty, out of uniform, they love, desire, dream, fear and fantasize like all teens everywhere.

I'm fascinated by the research authors do to create their books. In one

interview you mentioned that you interviewed girls waiting for their drafts in order to write FREEFALL. What other research did you do for this book? Do you like researching?

I love doing research. I love it because it involves meeting new and interesting people, stepping out of my own life for awhile and into someone else’s. For Freefall I set up interviews with girls serving in combat units or those hoping to be accepted into combat. One of the interviewees, who inspired Lily’s character, is a Moroccan girl who lives in a neighborhood next to mine. She was having a great time making fun of the cultural differences between us, me being Ashkenazi and originally Canadian, and laughing at our different attitudes and food preferences and all with an easy sense of humor. I was captivated by her and that’s when Lily’s character became set in my mind.

I also went to watch the soldier’s parachute jumps. That was terrifying and exhilarating. Driving to the jump site was an experience. Finding the turn off, which was onto an abandoned road at the end of a dusty path would have been easy to miss if it weren’t for all the parents who had parked, popped open the trunks of their cars and lugged out coolers stuffed with food and drink, as if as soon as the paratroopers landed the first thing they’d want to do is eat—my appetite having disappeared at the first sight of the planes circling above. All of us stood, craning our necks as the planes flew over and we clapped at the first sight of the tiny stick figure appearing, as if they could hear us. We were clapping for them as much as for each other and for ourselves.

For Jodie’s Hanukkah Dig I’ve crawled through narrow underground caves slogging through water up to my knees. I’ve sat in the sun digging for hours to uncover nothing more than another pile of dirt—while discovering the excitement of working beside others, talking and sharing the feeling of “what if?” Digging for treasures—tell me that isn’t something you’d not drop everything to do right now?

I used to live on a kibbutz up on the Northern border of Israel. From my window I could see Lebanon. Mornings I would get up at 6:00 AM to work in the apple orchards and I remember walking through the still silent kibbutz to the dining hall and seeing the sun rise, illuminating the sky. I would savor the stillness and beauty aware that it was fleeting (soon the hot sun would be beating down on me while I had a heavy sack around my neck reaching for an apple that would surely send me tumbling off the ladder). This is what Aggie and her friends have learned to do, to appreciate the moments of joy while they can grasp them, because life here changes so quickly.

What are some of your favorite YA books?

I’ll begin with poetry! Like Neruda, “I have a crazy, crazy love,” of poetry. I highly recommend all things Billy Collins (his anthologies are wonderful), will re-travel “The Road Not Taken,” reread Elizabeth Bishop, and Emily, and Naomi Shihab Nye and James Fenton (these last two are poets I’ve been reading most recently) and this list goes on and on.

Where were you when you found out you had won the Sydney Taylor Book Award Honor? What does winning this award mean to you?

Hanukkah. And Danny Roupe our channel 10 weatherman had been promising rain. Like many things in this country, we pray for and anticipate, but when they finally happen we’re caught by surprise. At around 3:00 in the afternoon I get a note from one of the Sydney Taylor Award judges that she wants to call and “give me the good news and can I send my phone number.” Well, from that moment on I’m yelling, “No one touch the phone!” My husband arrives late because traffic is backed up due to slippery roads (still no phone call). We light the Hanukkah menorah (still no phone call). And just when I’m sure it’s time for her to call…remember the rain? Well, whenever the drops turn to a drizzle you can be sure there will a power outage. The lights go out. The phone line goes down. And we’re all standing around the fuse box holding up Hanukkah Menorah trying to figure out how to “banish the darkness” and bring back the light – and the phone line!

I received the news on the fifth night of Hanukkah. Was I thrilled? And how! To be recognized by the Association of American Jewish librarians is a wonderful honor. As a North American and an Israeli, this award unites both aspects of my identity. As an Israeli, I feel that I share this award with the Israeli teens who are striving to live normal lives in a very stressful environment. As a North American it gives me a great feeling of achievement to be recognized by the librarians who I have always admired and who have kept me supplied with great books since childhood.

Thanks for a great interview, Anna, and congratulations on your win!

You'll definitely want to check out the rest of the Sydney Taylor Book Award Blog Tour! Today there's also an interview with Jim Burke, illustrator of Naming Liberty, over at The Page Flipper.
Abby at 1:01 AM
Share
‹
›
Home
View web version