What would your life be like if military service was compulsory, not voluntary?

For 18-year-old Aggie, this is the case. Aggie lives in Israel and as her draft date approaches, she has to decide how she'd like to serve the allotted military time. Will she get a desk job and fill out paperwork for the next two years? Will she audition for the entertainment troupe as her best friend is doing? No... Aggie's decided that she wants to apply for an elite combat position.

Her parents think she's crazy. And when Aggie gets to her first training session, she begins to think that maybe she is crazy. But Aggie's nothing if not determined. And if she can muster the courage to dive in to what she wants, Aggie just might figure out what it takes to survive.

Here's what I loved about Freefall:

1. It has a great sense of place. Ms. Levine's descriptions really bring the reader into Israel. I've never been there and (to be honest) don't know a great deal about the country, but I still felt like I could see all the places she was writing about. Which brings me to...

2. Information about Israel and about the military service there is incorporated very organically. An American teen reading this book likely won't know very much about teen life in Israel, but Ms. Levine provides the background info you need to know without getting all textbook-y. This would be a great book to hand to teens who want to know more about life in Israel.

3. I thought Aggie's perspective was interesting and unique in teen literature. This is definitely a book that will provoke some discussions. I mean, what would your life be like if military service was compulsory??

I loved the juxtaposition between Aggie's "normal" teen girl life and the scenes where she's in combat training. While I wouldn't call Aggie a girly girl, she's got crushes on boys. She thinks about her looks. She hangs out with her best friend. But then she's also facing boot camp, trying to gain weight so she'll qualify for the combat team she wants. These are two very different parts of Aggie's life, but she wouldn't be who she is without both of them.

I think this is a great book for teens who like to learn about other cultures and who like books that inspire them to think. This would make an excellent book discussion book and it'd make a great conversation starter. It has a premise and characters that will keep the attention of teens and it may inspire them to keep reading and learning about Israel. 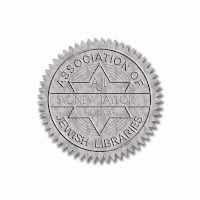 Freefall is the 2009 winner of the Sydney Taylor Book Award honor for teen books. Check out freefallthenovel.com for more info about the book. Read more reviews at Boho Chick, Liv's Book Reviews, and Reading to Myself (among others).

You can read interviews with Anna Levine at Bookluver-Carol's Reviews, Elizabeth O. Dulemba's and HarperCollins and TOMORROW you can read one RIGHT HERE as part of the Sydney Taylor Book Award Blog Tour! So... stay tuned!
Abby at 8:11 AM
Share
‹
›
Home
View web version