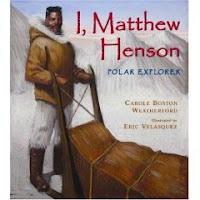 It all started when I picked up the picture book I, Matthew Henson: Polar Explorer by Carole Boston Weatherford and Eric Velasquez. I didn't know anything about Matthew Henson. I just knew the book had gotten some buzz around the kidlitosphere (see here and here). Once I picked it up, I could see what the fuss was about... Strong and concise words read like poetry telling a brief story of Matthew Henson's life. The artwork is gorgeous, perfectly complimenting the words. It would make a great readaloud for upper elementary or even middle school students doing a unit on explorers, African-American history, or biographies. I read the inspiring story of Henson's life and...

I had to know more.

So I picked up Onward: A Photobiography of African-American Polar Explorer Matthew Henson by Dolores Johnson. With tons of awesome photographs, some spanning two pages, this book delves into the life of Matthew Henson in a bit more detail. He was born in 1866 and his
adve 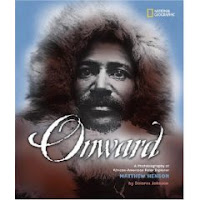 nturous spirit led him to work as a cabin boy on voyages to China, Japan, North Africa, Russia, and Spain (among other places). Eventually he met Robert Peary, the man with whom he would 'discover' the North Pole. After several failed attempts and brushes with death, Peary and Henson were the first men to reach the North Pole. Henson's warm relationship with the Inuit people (he learned their language and taught other men on his treks about their culture) and his skill with dog sledging were integral to their success... and yet for many years after they reached the North Pole, Henson's contributions were downplayed because he was African-American. This book goes into enough detail to be useful for school reports and it has cool photos and an exciting story that will appeal for recreational reading, too. Matthew Henson's story is interesting and gives much to think about and discuss. Remember him when kids come begging for biographies!

But that wasn't all I found in my Matthew Henson quest...

A search for "Matthew Henson" in my library's catalog led me to North by Donna Jo Napoli.

North is the story of Alvin, a boy with dreams of being an explorer. He pictures himself going to Africa, Asia, the Amazon... Unfortunately, his mother is so overprotective that she won't even let him buy a bicycle with his own money. When Mamma finds out that a drug dealer approached Alvin on his way home from school, she insists on having an elderly neighbor walk him to school every morning. For Alvin, it's the last straw. He's been studying the polar explorer Matthew Henson in school and he decides to follow the footsteps of his hero. He'll travel to the North Pole and see with his own eyes what Henson described as "fierce beauty". So he sets off. He's got a backpack full of clothes, a sleeping bag, and $439.00. First stop, New York City. From there all he's got to do is keep traveling north, right?

What I really liked about North is that I found it remarkably believable. Alvin's journey isn't easy and he makes plenty of mistakes. Certainly he makes friends and gets lots of help along the way, but never to a ridiculous point. This was a fast-paced adventure story that I couldn't put down. (And don't take my word for it... check out another review at a wrung sponge.)

My one complaint is, of course, the lack of an author's note... I would have loved to see what inspired Napoli to write this book, where she turned for research, and if she traveled to the Arctic... but then, I am a big author's note geek. We know this.

I suppose the point of this post is to show how books can lead you in different directions and how one book can connect you to all kinds of other books you might never have found otherwise. I never would have picked up North if I hadn't had an interest in Matthew Henson, which was inspired by I, Matthew Henson. I've read several books lately that have inspired me to seek out more information and led me to other books. I hope to explore more connections in children's literature in the coming months, so keep your eyes peeled for that!
Abby at 1:01 AM
Share
‹
›
Home
View web version