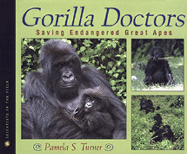 In Gorilla Doctors, Pamela S. Turner examines several factors in the endangered population of mountain gorillas. Poachers are a major threat, as is habitat desctruction. But another threat is human disease. The mountain gorillas live in protected areas, but these areas are right alongside human dwellings and although scientists try hard to protect gorillas from our diseases, sometimes the gorillas catch them.

Why is that so dangerous? Well, gorillas have no resistance to these diseases. Much like European diseases decimated Native American populations when the colonists came to America, human diseases could easily destroy the dwindling mountain gorilla population.

Cue the gorilla doctors. This special team of scientists test gorillas constantly, looking for threats of disease. When human diseases are found, the gorilla doctors treat them. They also make sure that tourists who come to see the gorillas don't pass on any germs. Tourists can come into the parks for a limited amount of time, they must be healthy, and they must not leave anything behind.

I found this book to be a fascinating addition to the Scientists in the Field series. Turner includes some background information about gorillas and the study and preservation of gorillas. There are great color photos on every page showing gorillas and the African jungles in which they live. Turner includes resources about conservation and what we can do to help gorillas. The book includes a short list of books and websites for further reading and an index.

This would be a great book to promote for Earth Day, which is just around the corner!

Happy Nonfiction Monday! Be sure and head over to Picture Book of the Day to peruse the many interesting posts!
Abby at 1:01 AM
Share
‹
›
Home
View web version