We had the Shark Cart from the Newport Aquarium visit earlier this month, so to get the kids excited about it, I did a shark storytime the week before. This is one of those storytimes that I thought would be difficult to plan, but it turns out that LOTS of librarians have done shark storytimes and there was plenty of fun material to be had. 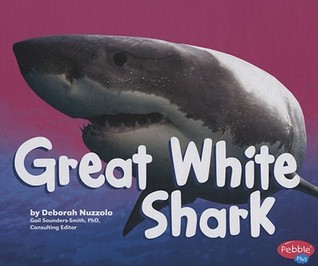 Book: Great White Shark by Deborah Nuzzolo (Pebble Books, 2008). I used this book because I wanted to use one with real photos and the Pebble Plus books are great for having large full-color photographs. We talked about lots of great vocabulary words in this book - predator and prey, nostril, and more. I was worried about real pictures being too scary, but it turns out kids are brave. I did warn them before the last spread of the shark jumping out with its toothy mouth open wide. ;) 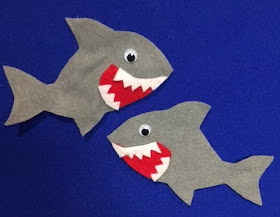 This is a traditional rhyme that helps children practice motor skills and following directions.


I adjusted the lyrics slightly:

We repeated with different colors until the kids were ready to move on. 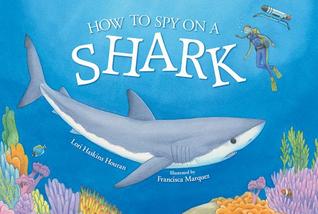 Book: How to Spy on a Shark by Lori Haskins Houran (Albert Whitman, 2015). This nonfiction book uses gentle rhyming text to describe one way that scientists study sharks: by tagging them and having robots follow and record what they are doing. I chose this one because it's a very simple introduction to some of the work scientists do.

Action Song: The Sharks in the Sea
(Tune: The Wheels on the Bus)

Repeat with different sea animals. We did fish/swim, lobster/click clack and then I turned it over to the kids and they suggested sea turtle/glide, octopus/wiggle, and dolphin/flap tail. 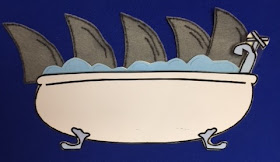 Felt Rhyme: Sharks in the Bathtub

One little shark in the bathtub
Going for a swim
Knock, knock (clap twice)
Splash, splash (pat knees twice)
Come on in!

Repeat with two, three, four, and five. At the very end "They all fell in!" and knock the felt pieces off the board. 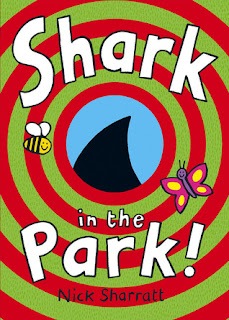 Book: Shark in the Park by Nick Sharrat (Corgi, 2000). This is one of our department's very favorite storytime books. It's cute and has actions the kids can do along with it (looking along with their telescope). This is a great one for practicing directions (look up, look down, look left, look right) and it has a fun surprise ending that kids love. 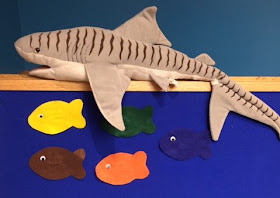 Five little fishies, swimming in the sea
Teasing Mr. Shark "You can't catch me!"
Along comes Mr. Shark, quiet as can be
And SNAPS that fish right out of the sea! (clap on "Snaps!")

Repeat: count down until there are no fish left.

We have a shark puppet and I love to use puppets with this rhyme.

Closing Song: Do You Know What Time It Is?
Abby at 7:11 AM
Share