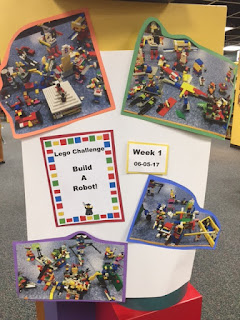 We started Lego Challenge Nights this summer as a way to add an evening program to our packed summer calendar. Since the program is relatively self-directed, it's a fairly easy program to offer and it doesn't require a huge amount of advance prep, set-up, or instruction.

It's been a kind of surprise hit this summer, attracting way more people than our Lego Club had attracted in previous years. I think part of that has to do with how we're marketing it ("Lego Challenge" sounds more mature and more interesting than "Lego Club") and part of it has to do with setting it up out in our department instead of in a meeting room (more visibility = more kids joining in).

I handed this one off to my staff to plan and they have really done a great job with it. Ms. A came up with the weekly Lego Challenge topics. Our first week, we challenged them to build a robot and our second week we challenged them to build dinosaurs. Ms. T is the one actually running the program and she does a great job of building suspense for the challenge so that it feels  more like an actual PROGRAM and less like a self-directed activity. As families came in and started asking about it, she would let them know that the program started at 6pm and the week's challenge would be announced at that time.

She put up tables in the department and put out our Lego collection. Once she announced the challenge, kids and families went to town, building their creations. As kids finished up, they brought their creations to the desk to tell her about them. She took photos of them and talked to the kids about what they had come up with.

We do not offer any prizes or judging of the creations. That's not what this activity is about. We asked kids to challenge themselves to come up with an original creation, either working by themselves or with friends and family.

After the program, Ms. T created a poster with the photos she took and posted it in our room so that everyone could see some of the creations the kids came up with. Hopefully this will spark some interest for future weeks!
Abby at 3:41 PM
Share
‹
›
Home
View web version