We talked a little bit about why manga might be so popular with teens - it's often funny or wacky or strange, so something a little different than typical American books. Even the format feels like a rebellion or like something that many adults wouldn't understand or like or bother with. Emotions are often depicted as over the top (which can be exactly how something FEELS when it's happening to you). Manga series can last tens or hundreds of volumes, which gives readers plenty of fuel to keep going and engaging with the characters or plots they are enjoying.

Here, our teens know what they love and what they want in manga and anime. Most often they are the ones making suggestions to us on what to buy, rather than our staff giving them reader's advisory. But even if our RA skills aren't called for very often with this genre, it's great to pick up books, series, and genres that our teens and kids love so that they know that we honor what they value and we're willing to give it a chance.

I don't know that anyone in our group necessarily discovered a newfound love for manga, but I appreciate that they were all willing to give it a try! Here are the series we read from: 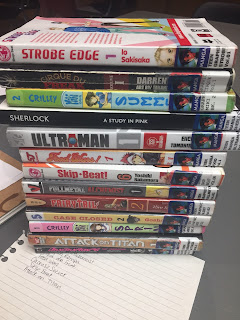 Next month is Reader's Choice as we gear up for the Summer Reading Club! What great books have you been reading lately?