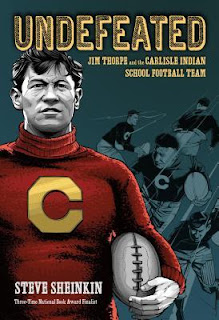 Did you know that when football first started, long passes were illegal? The most popular kick for a field goal was to drop the ball on the ground and kick it on its bounce.

Star of the Carlisle Indians was Jim Thorpe. He's considered one of the best American athletes ever. He scored almost half of the total Indians points during the seasons he was on the team. And the coach didn't even want to try him because he was so small.

Thorpe wasn't only a star on the football field. He also played professional baseball and won gold medals for the decathlon and pentathlon in the 1912 Olympics.

For anyone who likes sports, particularly football, this is a great read with plenty of play-by-play action.

Steve Sheinkin writing about Jim Thorpe? You had me at hello.

Sheinkin pays homage to football legend Jim Thorpe with his signature compulsively readable style and tons of archival photographs. It's obvious that Sheinkin is taking great care to write of indigenous nations with respect, always identifying the nations to which people belong. Beyond that, I don't have the expertise to evaluate Sheinkin's treatment of culture here. He condemns the use of boarding schools to "civilize" indigenous people and raises questions for teen readers to consider throughout the book (example: would anyone have dared to take away Thorpe's Olympic medals if he had been white?).

Last year, I listened to the audiobook of Joseph Bruchac's "novelized" biography, Jim Thorpe: Original All-American, which is written in first person. I loved that book, too, but I'm glad to have a stricter nonfiction look at Thorpe from such a well-regarded author. Undefeated is just as compelling a read.

Readers who are looking for compelling historical nonfiction with sports action may enjoy either the young reader's editions or the original adult editions (depending on age of the reader) of The Boys in the Boat* by Daniel James Brown or Unbroken by Laura Hillenbrand.

Readers who are interested in meeting more historical athletes might enjoy Babe Conquers the World: The Legendary Life of Babe Didrikson Zaharias by Rich Wallace, A Strong Right Arm: The Story of Mamie "Peanut" Johnson by Michelle Y. Green, or The Greatest: Muhammad Ali by Walter Dean Myers.

Readers who are interested in more sports nonfiction might enjoy We Are the Ship: The Story of Negro League Baseball by Kadir Nelson, Outcasts United: The Story of a Refugee Soccer Team That Changed a Town by Warren St. John, or A Whole New Game: The Story of the All-American Girls Professional Baseball League by Sue Macy.

And of course, readers looking for excellent nonfiction in general would do well to pick up Steve Sheinkin's other titles!

* Worth mentioning that the young reader's edition of this book (and possibly the original version? I listened to the audiobook, so I can't tell for sure) contains a problematic photo of the athletes "playing Indian" with feathers on their heads and no explanation for young readers. Be aware.
Abby at 7:11 AM
Share
‹
›
Home
View web version