I Survived the Library

This was my favorite summer program this year:


I Survived the Library 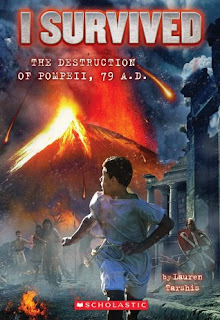 I know, I know. I'm late to the party. While we still have kids who look for and enjoy Lauren Tarshis's I Survived series, the heyday of its popularity is starting to pass here. But I had some ideas, so I wanted to do this program anyway. And since SURVIVAL is a pretty popular topic ANYWAY, I had great attendance and it was a really fun time.

I read the first chapters of:

In between each reading, I booktalked related books, featuring a few books about volcanoes, Titanic: Voices from the Disaster, and the two nonfiction I Survived Titles: Five Epic Disasters and Nature Attacks.

After our readaloud, I opened the room up for kids to explore our activities. Since I did this as a drop-in program, having mostly self-directed activity stations was a great way to accommodate whatever number of kids I would have. I did have one additional staff member in the program with me to run our volcano station, which worked out really well. This could have easily been a teen volunteer if we didn't have a staff person available.

Kids could choose between the following activities and spend as much or as little time at each as they wanted: 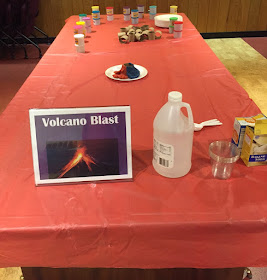 This activity came from Amy Koester on the ALSC Blog and I had used it previously at a volcano program several years ago. I purchased play dough from the Dollar Tree (you could also make your own play dough, which might be cheaper) and we used half of toilet paper tubes instead of the prescription bottles because we always seem to have those on hand (and they make for smaller volcanoes and less supplies).

I had Mr. S run this station just to keep the mess of explosions at a minimum and to make sure our baking soda and vinegar would last through the entire program. 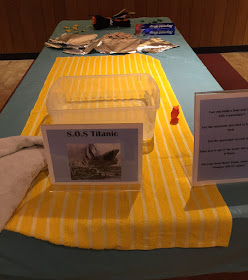 For this stations, I challenged kids to build a boat that would float while holding a passenger. I provided materials we had around our office: aluminum foil, craft sticks, pipe cleaners, modeling clay. You could use really anything you have on hand for this. I think my "passenger" was a little too light to really make this station challenging, but some kids really experimented a lot, trying out different designs and materials.

The idea behind this station is to design a building out of Legos that would stand up to an "earthquake". I used the instructions from Scientific American for their Earthquake-Proof Engineering for Skyscrapers activity because I had all the stuff on hand. You can also try a similar activity with a mini-trampoline if you have one of those (or if a local fitness center or school would lend you one?)

Legos are always super popular and kids enjoyed building their creations and testing them out on the earthquake simulator. It wasn't very easy to actually stick the Lego buildings onto the base while it was attached to the simulator. If I tried it again I might take the base out for each new building, especially if I had staff or a volunteer to specifically man this station.

I was surprised at how many kids stayed for the entire program and spent a lot of time visiting the stations. Of course, I had a couple who blitzed through the activities and then left and I had some kids arriving halfway through the program, but since the stations were all self-directed that was fine.

And of course I put out a huge book display with lots of I Survived titles and other survival books that kids were encouraged to check out. 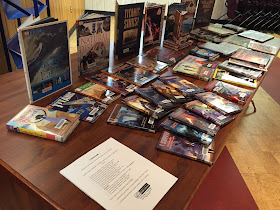 Of course, I am far from the only librarian to do an I Survived program. For more ideas and inspiration, check out these other great programs: