One of my #YesWeCrab goals was to write up this fall's storytimes that I never got around to posting. I normally like to write in more detail about the books and activities that I chose, but due to the delay in posting, you're just getting my bare bones outline.

I did this monsters storytime the last week of October as a slightly scary option that wasn't actually HALLOWEEN. But one nice thing about monsters is that you can use this theme any time! 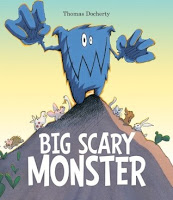 Book: Big Scary Monster by Thomas Docherty (Templar, 2010). Big Scary Monster loves scaring all the other creatures, but when he heads down the mountain in search of more creatures to scare, he finds himself getting scared and lonely.

Felt: Go Away, Big Green Monster (based on the book by Ed Emberley) Not only does this felt story reinforce body parts vocabulary, it shows kids that they have nothing to fear from monsters. 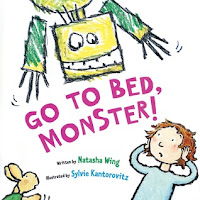 Song: If You're a Monster and You Know It

(gnash your teeth, show your claws, stomp your paws, wiggle your tail, give a roar) 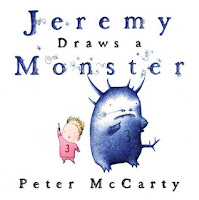 Book: Jeremy Draws a Monster by Peter McCarty (Henry Holt BYR, 2009). Jeremy is a lonely little boy but when he attempts to draw himself a friend, he ends up with a rude monster.

Felt: Five Little Monsters Jumping on the Bed. Miss T made me this super cute felt with the template from Falling Flannelboards. 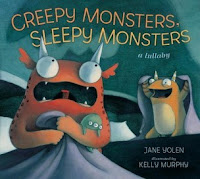