I don't know if you know this about me, but I love bats! I think they're awesome! And with Halloween coming up this week, what better time to explore bats in our Preschool Lab? Here's what we did. 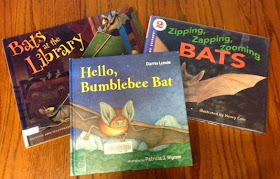 Book: Bats in the Library by Brian Lies (Houghton Mifflin Harcourt, 2008). I shortened this one a bit since I tend to have a young, wiggly crowd. We talked about bats being nocturnal and pointed out funny things the bats were doing in the pictures. The text is rhythmic and rhyming. Hearing rhyming words promotes phonological awareness, the ability to hear that words are made of smaller sounds. Even though this is definitely a made-up story, there are lots of fun details that present facts in the picture (like when the bats are looking at "fancy food guides", they're actually looking at insect books!). 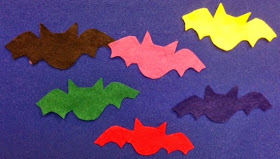 Felt Activity: Color Bats. I had made this set for a nocturnal animals storytime some time ago. We again talked about bats being nocturnal. I passed out the bats and then read this rhyme to call kids up to put their bats on the board:

The sun is setting,
The moon's rising high.
Now all the red bats
Start to fly!

After all the bats had been placed on the felt board, I told them that a group of bats is called a colony and together we counted the number of bats in our colony.

If you want to continue the fun, talk about how bats sleep (hanging upside down) and you can turn your bats upside down as you say this rhyme:

The moon has gone,
The sky's getting light
And all the red bats
Say goodnight!

Not only does this activity reinforce the idea of bats being nocturnal (though the repeated rhyme), it helps kids practice colors and get more comfortable with approaching an adult who is not in their family (school readiness skills!).

Book: Zipping, Zapping, Zooming Bats by Anne Earl, illustrated by Henry Cole (HarperCollins, 1995). The full text of this book is too much for my littles, but I did use one spread that shows the bat's wing. We talked about how a bat's wing is different from a bird wing - no feathers and the bone structure is different. And we talked about how a bat's finger bones make up the structure for its wings, so a bat is able to make its wings bend in many different ways. And we demonstrated using our own fingers.

I think the concept would have hit home more if I had a bat model, even a stuffed or large plastic bat to really show them where the bones are. But some of the kids got it, I think!

Book:  Hello, Bumblebee Bat by Darrin Lunde, illustrated by Patricia Wynne (Charlesbridge, 2007). This simple nonfiction picture book is great for sharing with a young group. Simple text asks and answers many questions about the smallest of bats. It's quite easy to skip spreads if you need to shorten. And I had one little gentleman who somehow asked a bunch of questions out of curiosity just as we got to the spreads that answered those questions! 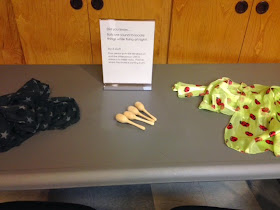 Hear Like a Bat - This simple activity is designed for kids and caretakers to do together and it illustrates how bats "see" with sound (very simplified, of course). One person puts the blindfold on and the other person rattles a maraca. The blindfolded person points to where the sound is coming from. This activity was adapted from Child Care Lounge.

Nocturnal Animal Puppets - The most fun station for everyone was our nocturnal animal puppets. I looked up a list of nocturnal animals online and found that we actually had quite a few nocturnal animals in our puppet collection! I put out a fox, deer, wolf, beaver, owl, cat, mouse, possum, and firefly for the kids to play with.

All in all, the stations were not super popular this time around, but the storytime went over better than I thought it would. The kids were really interested in the books, asking great questions and sharing what they knew. We also learned some great vocabulary words like "nocturnal" and "echolocation".

And, of course, I am happy to spread my love of bats to the next generation!