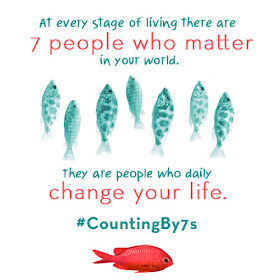 Welcome to the Counting by 7s blog tour! As you may know, I loved Holly Goldberg Sloane's new middle grade novel Counting by 7s. It was a story that I did not want to put down and if you love character-driven tales like I do, you won't want to miss this one*. I'm so excited to be a part of this blog tour with some other fantastic bloggers!

So, what is Counting by 7s about?

In the tradition of Out of My Mind, Wonder, and Mockingbird, this is an intensely moving middle grade novel about being an outsider, coping with loss, and discovering the true meaning of family.

Willow Chance is a twelve-year-old genius, obsessed with nature and diagnosing medical conditions, who finds it comforting to count by 7s. It has never been easy for her to connect with anyone other than her adoptive parents, but that hasn't kept her from leading a quietly happy life . . . until now.

Suddenly Willow's world is tragically changed when her parents both die in a car crash, leaving her alone in a baffling world. The triumph of this book is that it is not a tragedy. This extraordinarily odd, but extraordinarily endearing, girl manages to push through her grief. Her journey to find a fascinatingly diverse and fully believable surrogate family is a joy and a revelation to read.

And just as Willow counts by 7s in the book, Holly Goldberg Sloane is counting by 7s in this blog tour! She's sharing 7s - from her seven favorite books to seven things her fridge can't do without - around the blogosphere. For more of Holly's lists, make sure you check out the other tour blogs listed below.

7 things to imagine in the future

1.  Bike lanes where there are now freeways
2.  Showers and bathrooms and drinking water for everyone in the world
3.  Pets that can talk to you
4.  A single cure pill to take when you are diagnosed with cancer
5.  Shoes that allow you to jump ten feet off the ground
6.  Mobile apartments
7.  Trips to Mars on weekends 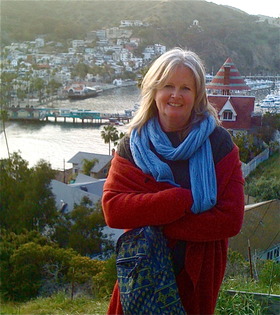 Holly Goldberg Sloan was born in Ann Arbor, Michigan, and spent her childhood living in California, the
Netherlands, Istanbul, Washington, DC, and Oregon. She has written and directed a number of successful family feature films. The mother of two sons, Holly lives with her husband in Santa Monica, California. I'll Be There was her debut novel (she earlier had written a middle reader book called Keeper).

Follow along the Counting by 7s blog tour to read all seven of Holly’s posts.

So, don't miss this book. And if you read it, join the conversation on Twitter with the hashtag #CountingBy7s. And feel free to share your own 7s in the comments below. ;)