It was the perfect week to explore pumpkins in storytime, so here's what I did: 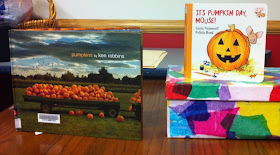 Opening Song: My Hands Say Hello (they LOVE when we have our tongues say hello!)

Memory Box: This week's Memory Box item was a packet of seeds from Pumpkins. Having two fall sessions has been a little bit confusing as far as the Memory Box is concerned, but that's okay.

Rhyme: Five Little Pumpkins. This is a felt that we purchased long ago. We've changed the words a little bit because we know some of our families here don't celebrate Halloween:

Book: Pumpkins by Ken Robbins. A LOT of the pumpkin books out there detail the growth of a pumpkin, from seed to vine to flower to pumpkin. I chose this one because it uses real photographs, which is something I like to share with my kids. We talked about what color pumpkins are, where we've seen pumpkins, and if anyone has gone to pick out pumpkins in a pumpkin patch. 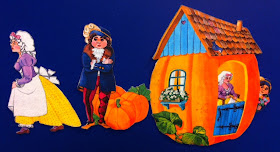 Rhyme: Peter, Peter Pumpkin Eater. This is from a felt nursery rhyme set that we purchased long ago.

Peter, Peter, pumpkin eater
Had a wife and couldn't keep her.
He put her in a pumpkin shell
And there he kept her very well.

Book: It's Pumpkin Day, Mouse by Laura Numeroff. This board book is a little bit small to share with a group, but I like that Mouse paints different expressions on his pumpkins. I asked the kids to show me their happy / sad / surprised / scary faces, too.

Felt: The Perfect Pumpkin. We have a pumpkin shape and lots of black shapes and together, we created some very silly pumpkin faces. I asked the kids what we should use for eyes, nose, and mouth and we tried several different combinations.

Felt: Build a Pumpkin Patch. Then I passed out our felt pumpkins and called kids up to put them on the board by using the colors they were wearing. 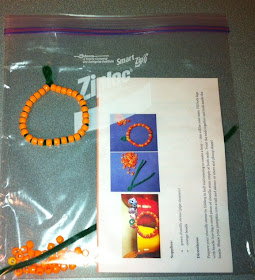 Craft: This comes from Blissfully Domestic, via Pinterest! It's super easy and helps develop fine motor control. It's a pumpkin made from a green pipe cleaner and orange/yellow pony beads.

Alternate Books: I found that many of the books I looked at for this storytime were variations on the same thing (how a pumpkin grows), so I chose my favorite and went with it. Here are some other ideas:

Apples and Pumpkins by Anne Rockwell
Five Little Pumpkins by Dan Yaccarino
It's Pumpkin Time by Zoe Hall
Piggies in the Pumpkin Patch by Mary Peterson (several bloggers have used this title in their storytimes, but we didn't have it, so I've ordered it!)
The Runaway Pumpkin by Kevin Lewis
Abby at 11:07 AM
Share
‹
›
Home
View web version