It was a cloudy day on Monday, perfect for our storytime all about clouds. This is a storytime that one of my staff members planned and I didn't get to use all the fun props she developed, but I'll share everything with you and let you know which ones I used and how they went. Here's what I did:

I played the theme from "Singin' in the Rain" as the kids came in for storytime. We had it on the CD Over the Rainbow: Songs from the Movies.

Memory Box: This week's Memory Box item was a feather from Thirsty Thursday by Phyllis Root.

Book: It Looked Like Spilt Milk by Charles G. Shaw. I had one little guy who kept saying "What is going ON?" every time I told them "It looked like ___, but it wasn't ___..." I've used it before with groups that got it right away and kept shouting "It's a cloud!" but this was definitely a hit with my group this week. 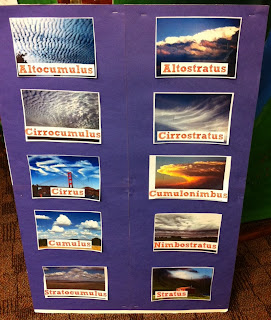 Book: Cloudette by Tom Lichtenheld. I wanted to give this one a try because the illustrations are so cute and it's a nice story about perseverance and the big things a little being can do. I was worried it might be too long, but I think it was a nice fit for my group except the little siblings got really squirrelly. The kids who were in the planned-for age range did fine with it.

Song: Little April Showers from the Bambi soundtrack. I passed out bells and told the kids we were going to be raindrops (remember how Cloudette rained at the end of the book?). We didn't listen to the entire song, but I had them "rain" faster and faster as the storm picks up. Then we rang our bells fast and slow and high and low and put them back in the basket.

Book: Thirsty Thursday by Phyllis Root. This is a short, gentle, silly book that worked great for storytime. 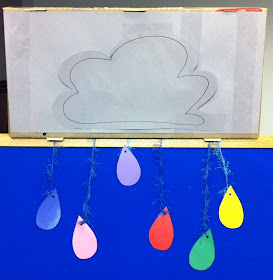 Prop Activity: Color Raindrops. A made this cloud out of a donated (new, clean) pizza box and laminated construction paper. I passed out the raindrops of different colors and as I called the colors up, kids brought theirs up and put it in the box to "feed" our cloud. 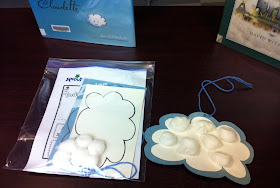 A made a couple more props, but I ran out of time because I got started a little late and Cloudette was a longer title. So I didn't actually use these with my group, but you might want to! 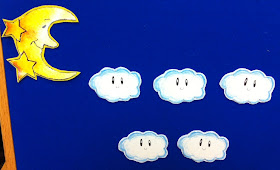 Felt Rhyme: Five Little Clouds. This is patterned off of "Five Little Pumpkins", so I'd read it with that cadence. 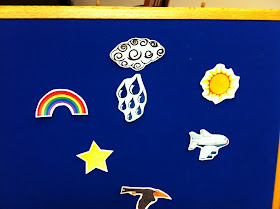 If you don't like or don't have any of the above books, consider using some of these:

Little Cloud by Eric Carle
The Cloud Book by Tomie DePaola
Once Upon a Cloud by Rob D. Walker
Sector 7 by David Wiesner

You can also supplement with books about rain or weather. I posted about a weather storytime we did last year and Storytime Katie has posted a storytime about clouds and rainbows.