The Trials and Tribulations of Anime Club

I've posted before about our Teen Anime Club (see posts here, here, and here), but it's been awhile since I talked about it. For a reason. We've had some trials and tribulations with our Anime Club and I have learned a lot over the past couple of months.


The kids LOVE IT. They want to come more often. They want to stay longer. We've had solid attendance of 20-30 teens every month. It's still attracting those hard-to-reach groups (for us, that's high schoolers and guys).

But here's the thing. Our teen librarian was on medical leave from October through January. And I thought "No problem! I can handle Anime Club on my own!" And it turns out that I had a lot to learn (and I'm still learning!) about how to wrangle dozens of teenagers.

First, let me say that I LOVE these kids. I'm getting to know more and more of them every month. I love that they're so passionate about what they like (and dislike!). But the problem is that they're so passionate that it's easy for things to get out of control. I'm okay with things being a little out of control. I want the teens to be teens. I want the library to be a place they can be themselves. But. I there's only so much chaos I can take before my brain explodes.

The first thing I did to cope was to shorten our meetings from 2 hours to 1 hour. We had originally planned the program to last 2 hours, thinking that would give us enough time to watch a movie or a decent amount of episodes. The kids didn't seem to be that interested in actually watching the movie, though. And between cranking up the volume so they few who were interested could hear it and all the other activity going on in the room (teens using computers and just generally being boisterous with their friends), the noise level was getting out of control. Two hours of unstructured time was inviting too much chaos.

We also introduced some different activities. Instead of simply watching anime (which only a handful of kids seemed to be into), we tried some structured activities like anime trivia and origami. We met varying success with these, but the program was still chaotic and our December meeting ended with me having to ask a group of teens to leave the library after repeated warnings about their noise level. 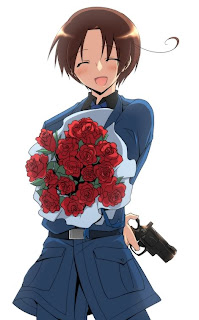 (An aside: it is true that we do not have a great place for teens to hang out, outside of programs. I know that they need a place where they can hang out, have access to their own bank of computers, and talk and laugh without having to be super quiet. I promise I'm working on it, but it's not something that's going to happen overnight. Sigh.)

After our December meeting, I did what I should have done in the first place: I turned to my trusted YA librarian friends and asked their opinion. I felt like my teens were all crazy (I say this with love!) and that I was totally ineffectual as a teen librarian (I'm a n00b and it shows!) and that something had to change.

The first thing they did was reassure me that they have dealt with these problems, too. It's NOT that my teens are crazier than most, it's just that it's how teens are (and kids. And sometimes YA librarians. True facts). The second thing they did was give me some advice about spelling out the rules and making sure I enforce them. I faced our January meeting with cautious optimism (and a little anxiety).

And then... We had a scheduling mixup that resulted in us offering Anime Club twice. And the program was awesome both times. I wasn't there for the first one (I was in Dallas, being crazy with my aforementioned YA librarian friends), but I was there for the second meeting. I did spell out my expectations for the kids and let them know what the consequences would be if they forgot the rules. Because we had accidentally listed two meeting times, attendance was split almost in half for each program. And I tell you: if Anime Club was like our January 31 meeting every time, I would hold it every week.

Here's what I have learned (so far) from my trials and tribulations with Anime Club:

- Spell out the rules for the teens. It's okay to have a certain level of noise and chaos, but figure out where your limit is and let the kids know. I told them no screaming, no yelling, no roughhousing, and no running. (Of course, I will forgive occasional excited shrieks when their friends arrive, etc.)

- Spell out the consequences. They will get one warning. If they forget the rules again, I will ask them to leave the meeting, but they will be welcome to come back to the next meeting.

- Stick to your guns. It might make you the "bad guy", but they'll remember and it will make your program go more smoothly.

- Let your teens know what activity you'll be doing at the next meeting. That way, they can choose whether they might like to come and participate. A little more advance planning will go a long way toward a smooth program (I... hope).

- We're considering offering our program more often in hopes that we might have more manageable attendance numbers. Patterning off of one of our neighboring libraries, we might offer Anime Club twice a month with a craft or activity planned for the first meeting and then showing a movie or TV show at the second meeting. That way, kids can show up for the activity they want to do and hopefully everyone will just be more into whatever we're doing that day.

There's definitely been a learning curve since I started being involved in our teen programming last summer. I have loved being involved and I have had a lot to learn, too.
Abby at 11:07 AM
Share