It's that time again: time for preschool storytime! Only this time, we've switched things up a tiny bit and we're expanded the age to 3-7 because we've introduced an after school session. I'm hoping that billing them as "Family Storytime" will bring in the elusive afternoon and evening crowd... So far, the afternoon session (4:30pm) is going like gangbusters and the evening session is still almost small enough that I would cancel it (I said we had to have 5 signed up and we have 6, so...). But we'll see how it goes.

This week, we talked about cats! And here's what we did: 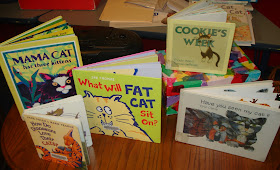 Opening Song: My Hands Say Hello. Honestly? HONESTLY? I kind of forgot that I needed to pick out an opening song until the morning of the first session and so I went with an old reliable.

Memory Box: This week's Memory Box item was a tiger from the book Have You Seen My Cat? by Eric Carle. Since today was the first session (and I had mostly newcomers), I explained what the Memory Box is and showed them the rhyme that we'll do each week.

Book: Cookie's Week by Cindy Ward. I think this was the biggest hit of our storytime. It's simple and funny and the kids can predict what's going to happen next. It emphasizes days of the week (great for vocabulary). I introduced it by saying that we were going to read a story about a kitty who does some naughty things and one little boy pipes up, "He's on the naughty list!" And then at the end when we see Cookie's tail disappearing through the doorway, I asked the kids if they thought Cookie was going to do something else naughty and one little girl says, "Or maybe he just wants to be private." :)

Book: Have You Seen My Cat? by Eric Carle. I tend to do the book with the Memory Box item as the first or second book because my kids tend to forget to look for the MB item. And sometimes so do I. If I had been thinking, I would have showed them the cat on the cover and explained that that was what the boy's cat looked like. But I was not thinking and so the end was a little anticlimactic.

Felt Song: Down Around the Corner. I totally stole this from Melissa at Mel's Desk, but I realized that I sing it to a different tune. I use the tune from "Over in the Meadow".

Book: What Will Fat Cat Sit On? by Jan Thomas. I love this book (and all of Jan Thomas's stuff), but I think my crowd was just a smidgen too young (I had several 2-year-olds) and this book went over their heads a little bit. Ah, well. At least ONE child thought it was HILARIOUS.


Book: How Do Dinosaurs Love Their Cats? by Jane Yolen. I really wanted to include something that taught the kids how to treat a cat (or a pet in general, really) and this fit the bill perfectly. Rhyming text and the added appeal of dinosaurs caught the kids' attention very well.

Song: Soft Kitty. I told the kids to make one hand into a fist, just like a little cat curled up to sleep. Then we took the other hand and stroked our "cat" very, very softly (just like they should pet a cat in real life!).

And yes, if you watch The Big Bang Theory, you are probably already familiar with this song:

Book: Mama Cat Has Three Kittens by Denise Fleming. When I introduced this book, the kids asked me if it had a naughty kitten in it and I told them that I thought it did. As soon as I read the kittens' names "Fluffy, Skinny, and Boris" one of the little girls calls out, "Boris is the naughty kitten!" 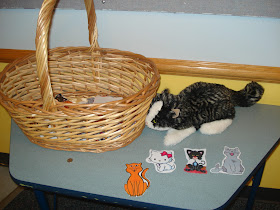 Activity: This book led right into our last activity. We had printed and laminated several pictures of kittens in different colors. I put our cat puppet into a large basket ("Mama cat") and passed out the kittens so that each child had one. When I called the color of their kitten, they came up and put it in the basket. We generally have 20 or fewer kids in each of our storytimes (sometimes substantially fewer), so we can handle an activity like this. It teaches the kids to listen and to take turns. I always hold one of each color/number/item back so I can show them the gray kitten when I call that one or the white kitten when I call that one. That way, if I have kids that are unsure about their colors, etc. they can easily see which one I mean.

Ending Song: Do You Know What Time It Is? 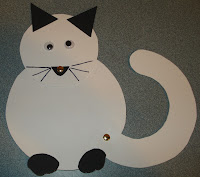 Alternate Books: If you don't like or don't have some of the books I mentioned above, here are some others you could use or display!