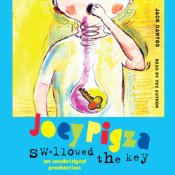 Joey Pigza was born wired. Some days, his meds work and he's able to calm down and concentrate. Other days...

If you haven't read Joey Pigza Swallowed the Key, I must insist that you do so at your earliest convenience. This is a modern classic that every children's librarian and elementary teacher (and parent) should read. I read it first in grad school and recently revisited it on audiobook. Joey's story is reality for a LOT of kids. According to the Center for Disease Control, almost one in ten children between the ages of 4-17 have been diagnosed with ADHD at some point in their lives. In an author's note, Gantos mentions that he was inspired to write this book by a child he met at one of his school visits.

Joey is such a believable and likeable character that kids, ADHD or not, are sure to identify with him and sympathize with his struggles. Jack Gantos brings Joey to life with details about how he's feeling when his meds aren't working. He's a kid with a good heart, but his goodness is often hidden by his impulsive decisions and hyperactivity. Of course, the story is told with plenty of humor and even some gross-out moments, so kids are sure to appreciate that, as well.

Audiobook is a great format in which to experience this story, BUT I say that with the caveat that I've met Jack Gantos and heard him speak and I think he's totally awesome. I'm not sure his narration would have the same charm if I hadn't previously seen him in person. Y'all know that when an author reads his own work, it's not the same as an actor reading it. Gantos's reading isn't flashy and it's not voiced. But it's earnest. Jack Gantos reads the story as if it actually happened to him and until I heard the author's note at the end, I could have sworn that he was writing from his actual experience. He writes it and he reads it so that his listeners can experience ADHD, too, and so that they might understand. And so that kids with attention disorders will understand that they're not alone and that they're not bad kids.

For kids, this is a fun story and they'll be rooting for Joey all the way through. For adults, this may be a necessary story.

Joey Pigza Swallowed the Key is on shelves now!

Hey, I'm an Audible affiliate, so if you purchase stuff after clicking the links on my site, I may get a small commission!
Abby at 7:11 AM
Share