In My Mailbox is a weekly meme hosted by The Story Siren in which bloggers post about the books they received in the mail (or bought or checked out from the library) during the week.

Here's what I got! 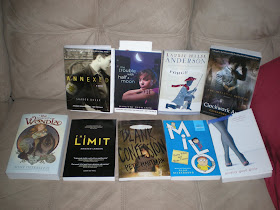 The Search for Wondla by Tony DiTerlizzi (Simon & Schuster, September 2010).


Now, a few of these are titles that I picked up at BEA, so I just might have to have a giveaway... Stay tuned...

How was your week? Anything good in your mailbox?
Abby at 7:11 AM
Share
‹
›
Home
View web version