(Hey, this is the third installment of my Book Expo recap. Don't miss the first and second installments!)

Thursday dawned cloudy and cooler (thank goodness!) than Wednesday. Jen was up early to get ready for the Adult Author Breakfast, emceed by Jon Stewart. The rest of us followed suit and we arrived at the Javits around 8:00. We were even farther back in the line on Thursday than we were on Wednesday! But I had mellowed out after a better night's sleep. I brought my suitcase and checked it so that we could make a speedy departure* to the airport to make our flights.

Thursday was better for me. I think it was mostly because I knew what to expect. I knew it was going to be absolutely crazy and I told myself that I was just going to pick up any books that looked interesting. On Wednesday, I had been very concerned with "getting my money's worth" and scoring enough titles on my list to make up for the $600+ that I spent to be at the conference. This is destructive thinking (and so shouldn't be the point of the event). On Thursday, I was able to let that go and just pick up books that looked interesting. It was a much better day for me (and probably for my companions, as well). It helps that Thursday was a smidgen less crazy. I actually met some of my publisher contacts while I was standing in line (NOT "on line") for things. And that was super cool. :)

I got separated from my companions almost immediately as we headed for HarperCollins and Disney/Hyperion first and then swung through Little, Brown. For some reason**, Little, Brown was an absolutely madhouse. I mean, wall-to-wall people. The people working the booth looked a little scared of us. Everyone was going every which way and it was crazy. But we got some good books. :)

I lost Kelly and Kim after that and I headed down to set up my box for the day (I love that shipping room!).I drew Batty on my box so that I could easily recognize it: 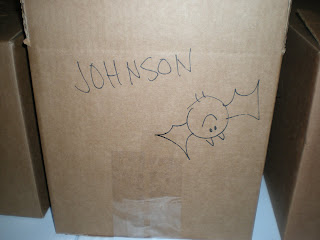 I wandered a bit, heading over to Candlewick, and then Jen was done with the breakfast and I met up with her. The two of us wandered. The only can't-miss thing on my agenda for Thursday was to get to Simon & Schuster and pick up an ARC of Forge, which Laurie Halse Anderson was signing. And I did it! I got in line about half an hour before her signing time and I was about 6th or 7th from the front.

Ms. Anderson was extremely nice and, when she saw I'm a blogger, she asked if I had reviewed any of her books and she asked me to email her a link if I review Forge. Of course, I happily agreed! I loved, loved, loved Chains and it ends on something of a cliffhanger, so I'm overjoyed to have Forge!***

After that, my day was made! Jen and I wandered over to the autographing areas and stood in a few short lines before we had to RUN to get everything done before our shuttle to the airport arrived. We divided and conquered to get our boxes packed up and shipped, get our suitcases out of the baggage check, and meet the shuttle...

...which turned out to be really funny when, after arriving at the airport by 3:00 or so and waiting for our respective 5:00 flights, they were both canceled due to weather and we ended up spending another night in New York. Argh. As stressful as that was, I'm glad that Jen was stuck with me and we could split a hotel room and spend one last night together!! We even ordered New York style pizza****! Yum!

I got up at 5am on Friday to catch my 8am flight back to Louisville. The lines were insane and they oversold my flight, but luckily I made it home, a mere 24 hours after we left the convention center and started our trek.

The most annoying thing? I passed on Book Blogger Con because it was going to be so much money to switch my flight and because I didn't want to spend the money on another night in a hotel. If I had known I'd have to stay anyway, I could have finished out my day at BEA and then stayed for Book Blogger Con! Oh, well.

So, BEA. It was a complete whirlwind. Absolute madness. But I'm so glad I went. It was great to meet up with so many cool people - bloggers and publicists. I can finally put faces to some of those names I see in my email! Will I go again? I think I will if I can trim the cost down a bit. I can't afford to spend this much money (and be away from work right when our Summer Reading Club is starting) every year. But, who knows... maybe I'll find some cheap plane tickets and coerce a NY friend into letting my stay with him... It could happen. :)

Coming soon: pics of the loot! Here's a little preview of the swag and a few of the books that I stuck in my carry-on luggage (Forge and four of the books we were given at the librarian dinner): 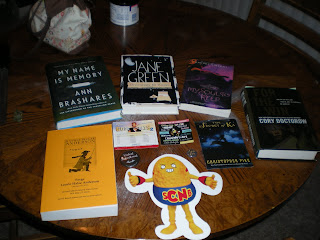 And tomorrow, I'll have a few more tidbits to round out the recap.

** Maybe it's because they have good books there? Or maybe because LB was giving out middle-grade grab bags (they had given out YA grab bags the day before). The grab bags were kinda like chum in the water. In a good way

*** And I sat down and read the entire thing on Saturday. It was wonderful! Review to come...