The Declaration by Gemma Malley. (Grades 7+)

It's the year 2140 and scientists have discovered the secret to everlasting life. Yes, you can now get Longevity drugs, a fabulous concoction that prevents disease and renews the body so that you can live forever! There's one catch. Of course the earth's resources are not unlimited. So in order to get Longevity drugs, you must sign the Declaration. And the Declaration says that you may not have children.

But some people do have children.

Anna is one of these children. They are considered Surplus, a drain on the limited resources of the planet. They are contained in dormitories where they are trained to be servants and menial laborers. To be absolutely obedient and to follow the orders of Legals. To hate their parents, the selfish people who created them.

Anna is nearly fifteen, the age at which she will go out into the world as a housekeeper for a Legal. She's a fast learner, a good cook, obedient, observant, and quite ready to start making up for her parents' sins by being a Valuable Asset. But then a new Surplus arrives. It's strange because he's Anna's age and usually Surplus children are caught much earlier. And he says strange things... that he knows Anna's parents, that they love her and want her back...

And suddenly Anna has a choice where she never had one before... Can she trust Peter? Could there really be a life for her on the outside?

Why did I like this book? Let me count the ways...

1. The premise is really interesting and the more you read, the more Gemma Malley fleshes everything out. Questions are answered along the way and everything fits together really tightly. And c'mon... who doesn't like dystopian worlds where children are illegal??

2. The characters... Near the beginning of the book, the Main Bad Lady hints that she is evil for a Reason. And it stayed with me as I read the book. And then everything was explained near the end. (And BOY HOWDY was it explained!)

3. The cover. Well... no, not the American cover which I actually don't like at all (hey, is that the same girl who's on the cover of Boy Proof? What do you think?).

But the British cover is awesome and it actually incorporates information from the book. First is the hardcover and second is the paperback. Waaay better than the American cover, in my opinion. 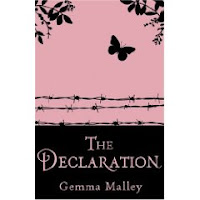 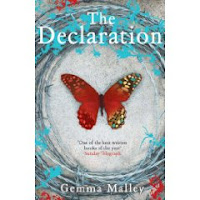 4. Recommendability. Okay, so I made that word up. But still. I can think of a lot of popular books that would make great readalikes. Particularly Among the Hidden because it deals with very similar subject matter, but also Uglies (teens figuring out that their supposedly perfect world is, well, not quite) or The Adoration of Jenna Fox (just how far would you go to save a life [your own life?]).

5. The ending. This book has quite a powerful ending. I totally didn't expect what happened, even though it made perfect sense. And when I was finished, I was so keyed up that I stayed up way past my bedtime and was really tired at work the next day. (So worth it.)

So. Yes. I liked it quite a bit. In fact, I am quite anxious to read the sequel (The Resistance... due out next week).