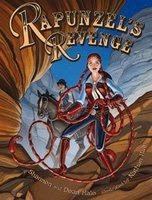 Loved it. LOVED IT.

Shannon and Dean Hale take Rapunzel's story, make Rapunzel totally kick-butt, plunk it down in a magical version of the American Old West, and add a little Jack (and the Beanstalk). It's fantastic.

Mother Gothel is an evil witch who has taken control of all the land. She has the power to make things grow or to stop things from growing. And now she sucks the life out of the land unless the people pay her exorbitant taxes. Rapunzel has lived with her in her walled-in palace, but when she makes her way over the wall she discovers that her real mother is one of Mother Gothel's slaves, forced to work in the mines. Rapunzel is determined to save her mother, so Gothel puts her in a tower.

But this Rapunzel doesn't sit around in her tower waiting for some prince to come save her. This Rapunzel is busy saving herself. And then she goes around saving everybody else. Once she escapes from the tower and flees Mother Gothel's goon, she runs into Jack, a fellow outlaw, who accompanies her in her mission to free her mother from Gothel's mines. On the way, they have incredible adventures and Rapunzel vows to defeat Gothel and free all the people from her evil influence.

It's sassy. It's funny. And one of my favorite things is that Rapunzel gets her revenge without killing people. She uses her powers (20 feet of hair!) to disarm and she prefers not to use violence if possible. And even though she doesn't kill anyone, she is still kick-butt.

And the illustrations are gorgeous and funny, too. I loved all the landscapes, the deserts that have been drained of their life by Mother Gothel and then Gothel's lush villa in comparison. I love that Rapunzel looks like a real person and that she's a hero but she doesn't need to wear cleavage-bearing, skin-tight clothing. Shannon and Dean and Nathan make an unstoppable team and I'm really happy that they're working on a sequel.

PS: How cool is this? From the author/illustrator blurbs on the jacket:

"Nathan Hale (no relation to Dean or Shannon) spent over a year on the artwork for Rapunzel's Revenge. During that time, he listened to sixty-eight unabridged audiobooks. He'd like to thank the men and women of the book recording industry and his local public library."

Who else has reviewed this? Oh, everybody.

Plus, Rapunzel's Revenge is Al Roker's new pick for his book club and Shannon Hale was, of course, thrilled (thanks to Jen and Sarah for the links). And you won't want to miss Erin's interview with Hale times 3.
Abby at 8:11 AM
Share
‹
›
Home
View web version