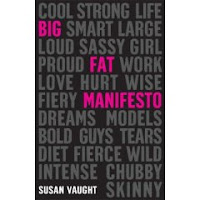 Jamie is a goal-oriented high school senior. She writes for the school paper. She's in the school play. She has a couple of caring, passionate best friends. She has a loving boyfriend. She wants to go to Northwestern. Oh, yeah. And Jamie's fat.

Determined to win a journalism scholarship, Jamie starts writing a new column for the school paper: Fat Girl. She wants to educate the community about what it's like living in a world that doesn't fit you, in a country that is so sensitive about racial discrimination but constantly discriminates based on size. And Jamie's column gets more attention than she ever thought it would. Part of that is Jamie's in-your-face attitude. She's talking about things that no one talks about. She's not apologizing for anything. And she's forcing the school and the town to listen to the Fat Girl talk.

When Jamie's boyfriend Burke decides to have bariatric surgery, Jamie's life is turned upside down. She thought he was happy with the way he was and can't believe he'd undergo such a risky procedure, but as the girlfriend she has no choice but to stand by him. She worries about the risks of the surgery. She worries about the side-effects. And yes, she worries that when he's a different size she may no longer fit into his life.

I found Jamie's voice to be utterly compelling and I thought her dealing with her boyfriend's new body was a really interesting conflict. Jamie's raw and in-your-face and sometimes she doesn't always think things through, but that felt so real to me. Jamie really came to life. I think the highest compliment I can pay is that I wish I could read more of her story. I want to know what happens next. I am not a sequel/series person. Me asking for a sequel says a lot.

One red flag I should mention is graphic descriptions of the bariatric surgery and its least desirable side effects. I found it pretty fascinating, but I'm into all that medical blood and guts stuff. I can't say with authority, but it seems like Susan Vaught has really done her research.

Read more reviews at Curled Up With a Good Kid's Book, Oops...Wrong Cookie, and Estella's Revenge.

Susan Vaught also wrote Trigger, a book that's been on my TBR list for much too long (and is now definitely getting bumped up).