Book Review: In Our Village 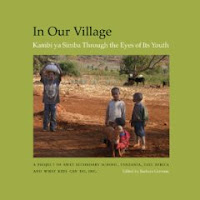 In Our Village: Kambi ya Simba Through the Eyes of Its Youth edited by Barbara Cervone. (Grades 3-7.)

(As usual, happy Nonfiction Monday and be sure to head over to Picture Book of the Day for the roundup!)

I stumbled upon this title while I was weeding the 900s section. It's a project created by Awet Secondary School in Tanzania and an organization called What Kids Can Do. This book gives us a look inside a small village in Tanzania.

In Kambi ya Simba life is much different than it is here in the States. Nearly half the people in Tanzania live under the poverty line, which is $180 a year. Access to electricity is scare in some places, in particular rural areas. Farming is the livelihood of many people, tying their lives to the whims of nature. Although education is improving, only one in ten kids continues on to secondary school which they have to pay tuition for.

This book was created by students at the Awet Secondary School and many of the photos were taken by them. They chose what they wanted to share with the world, what they would want the world to know about their village. And it's an enlightening look into the dreams and realities of one small African village. Some information is added by Tanzanian professionals such as doctors and agricultural experts who comment on some of the problems faced in the village. But the book is not all about problems. The children of Kambi ya Simba are friendly and ambitious. Some dream of being doctors, lawyers, and presidents. Here's a chance to look at the world through someone else's eyes.

The preface gives information about how Cervone came to start this project and how she met the kids at Awet Secondary School. The bulk of the book contains short chapters about many aspects of village life: cooking, farming, raising livestock, going to school, riding bicycles, singing, building houses, making clothing, etc. A section at the end gives additional information on Tanzania, including a map and a fairly lengthy glossary of Swahili words.

I thought it was a wonderful book, though not perfect. I wished the photos had captions. I'd like to know which were taken by students and which weren't. The text is edited together rather than presented as separate essays. Although Cervone gives a reason for doing this (wanting to make the book as coherent as possible and avoid communication breakdowns because of differences in English), it would have been neat to at least see some excerpts of essays from the kids to get a sense of their voices and get to know them.

Still, I think it's a great idea for a book and I think it would be interesting to use it as a class project. If kids in Illinois (or Hawaii or New York or wherever) could create a book to show other kids the important things about where they lived, what information would they include? What pictures would they take to show the world their hometown?
Abby at 8:01 AM
Share
‹
›
Home
View web version