Picture book audiobooks can be great for kids learning how to read or for classroom listening. Most of the preschool teachers I work with love them and request them on a regular basis. Even if kids are already reading, the excellent narration, sound effects, and music in these titles make them appealing. Here are some of my recent favorites: 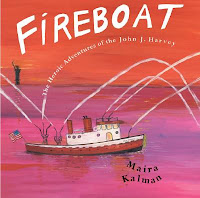 This nonfiction picture book starts off in 1931. Many things, great and small are happening, including the launch of the John J. Harvey, a New York fireboat. The John J. Harvey is busily protecting the piers of New York, fighting fires when they spark up and sometimes spouting water just for fun. The years take their toll and by the later part of the century, the John J. Harvey is not in use and will soon be sold for scrap... until a group of friends decides to restore the boat. When the attacks on the World Trade Center occur, the John J. Harvey is called for help and she bravely battles the fires along with scores of other people. Judd Hirsch provides great narration for the story and the sound effects really add to the recording. Although I really recommend the recording, make sure you take a look at the book for its gorgeous pictures. This title was on the 2008 Monarch Award Master List.

The Fox Went Out on a Chilly Night illustrated by Peter Spier. Narrated by Tom Chapin. Live Oak Media. (Preschool-1st.)

This delightful audio recording presents the traditional song The Fox Went Out on a Chilly Night illustrated with full color pictures that alternate with detailed black and white pictures. This would make a great choice for early readers who like to follow along with the CD. Tom Chapin is a great narrator, both for the spoken-word portion and the sung portion. The song is read first and then sung. Three tracks provide 1) the spoken song with page-turn signals, 2) the spoken song without page-turn signals, and 3) the song by itself (sung). This is a great way to introduce kids to this classic song and they're sure to want to sing it again and again. 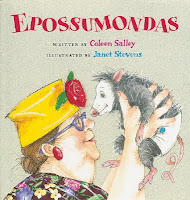 This retelling of a traditional Jack tale stars Epossumondas, a young possum who doesn't have the sense he was born with. When Auntie gives him a piece of cake, he carries it in his tight little fist, ending up with nothing but a handful of crumbs. Mother explains to him that the proper way to carry a cake is on top of your head. Later, when Auntie gives Epossumondas a pound of butter to take home, he carries it on top of his head with less than ideal results, and so forth and so on. Cynthia Darlow does a great job with narration. Each character has a really distinct voice and she makes the story a joy to listen to. 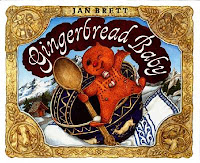 The story of the Gingerbread Boy is one of my most popular requests around the holiday time and I'm lucky to have several copies of this audio recording in my collection. Narrated by Frances Sternhagen (who played Charlotte's mother-in-law on Sex and the City and Dr. Carter's grandmother on ER), the lively text is accompanied by appropriately lively music. As that gingerbread baby outruns everyone trying to catch him, on young Mattie is clever enough to catch him. This recording makes great listening at the holidays or any time.
Abby at 2:23 PM
Share
‹
›
Home
View web version