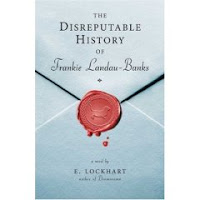 The Disreputable History of Frankie Landau-Banks by E. Lockhart. (Grades 7+)

When Frankie was a freshman at the prestigious Alabaster Preparatory Academy, she was as good as invisible. As a slightly geeky member of the Debate Club, her only tenuous link to the popular kids is her older sister Zada. When Fankie comes back for her sophomore year, some things have changed. Zada has graduated and Frankie's undergone a transformation. Over the summer, she's had a growth spurt and she's coming back tall and curvy. Suddenly boys are looking at her, including the object of her crush, the popular, funny senior Matthew Livingston. But Frankie's looks aren't the only thing that's changed about her. She's sick of being overlooked. She's sick of being underestimated. She's sick of being thought of as her parents' little Bunny Rabbit. And she's determined to make people stand up and take notice of her.

It's not quite as easy as she thought. She's ecstatic when Matthew notices her and she becomes his girlfriend, but she soon discovers that there's something more important in his life. And although Matthew doesn't know, Frankie finds out that he's an integral member in the school's all-male secret society, the Loyal Order of the Basset Hounds. Frankie could admit defeat and take the back seat to the Bassets (as the other girlfriends of the members seem to do), but that's not who she is anymore. So she does a little plotting and Frankie Landau-Banks takes over the Basset Hounds... without any of the guys realizing she's the one behind their pranks.

I loved this unusual book... I couldn't put it down. You find out at the beginning through a letter from Frankie to the headmaster of the school that Frankie was the one behind all the pranks the Basset Hounds pulled during the first semester... but it takes awhile for the action to unfold, to find out just what happened and how Frankie articulated her play for power.

Besides the great characters and intriguing plot, this book actually made me think a lot about power. Frankie's constantly questioning what it takes to be successful and the unspoken rules that we all follow. She wonders how far she can go to mix things up, break the rules. She wonders what it will take to get the boys to respect her as much as they respect each other. Do they respect each other because of the things they accomplish or because they're boys, buddies, connections? Frankie's dad (who also attended Alabaster) is always talking about the connections she's going to make that will help her be successful. Frankie wonders if she really needs to rely on these connections, if she needs to be tapped into the "Old Boys" network... what will it take for her to become successful on her own terms?

Frankie's definitely a kick-butt heroine and it's so great to see a girl find a boyfriend but refuse to let him push her around. Even though Frankie's not always the nicest person, I was rooting for her the whole way. If you like books with some intrigue and really interesting characters, pick up The Disreputable History of Frankie Landau-Banks.

But don't take my word for it... read more reviews at The Reading Zone, Reading Rants!, The Book Muncher, Under the Covers, and Little Willow. Also, check out an interview with E. Lockhart over at YA Fresh.
Abby at 11:56 AM
Share
‹
›
Home
View web version