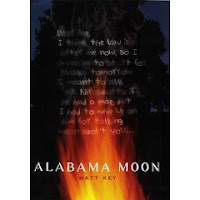 "The law can do whatever they want."

This is a statement that Moon Blake lives by. He's been raised in the woods of Alabama by a father who hated the government and taught Moon to avoid "the law". When Moon's pap dies, Moon is determined to make it on his own. He doesn't need anyone or anything. He'll go to Alaska where his pap told him there are other people just like them. People who hate the government and don't owe anything to anyone.

Moon's plan doesn't go quite as he expected, though. He's caught by a corrupt constable and sent first to jail and then to Pilson, a boys' home. But Moon doesn't fret. He knows he can fight anything three times his size and that he can figure out a way to escape and survive on his own. Moon does escape and two friends come with him. But as Moon gets used to having people around to talk to (people who are not his pap), he starts to realize that he never questioned anything his pap told him about the government. And he realizes that he'll need to figure things out on his own before he can make a decision about how he's going to live.

A friend described this book to me as "The Dukes of Hazzard meets Hatchet" and I think she's pretty much spot-on. The survival-adventure aspect will appeal to fans of Hatchet, My Side of the Mountain and others of that ilk. This book also gives you plenty to think about. I have to admit that for most of the book I wanted to shake Moon and tell him to go back to the home where he could get some decent food and go to school to learn about the government and then decide if he hated it or not. I also wanted to shake his father because how dare he raise his child with no knowledge of the real world and then die because he's too stubborn and afraid to go to a doctor? The reasons behind Pap's hatred of the government are eventually revealed. And I think it brought home the coming-of-age issue of learning to think for yourself and not taking everything your parents say for granted. Moon's at that turning point where he finally starts questioning the truths he's been raised by. (Hmm... remind you of another Caudill nominee? Which, incidentally, also deals with the Vietnam War...)

I agree with criticism that the end comes together too neatly, but I didn't dislike the ending. Read it and tell me what you think.

I would have loved to have seen an author's note (of course I would) explaining how Key came up with the idea for this novel. I'm curious if he's ever tried to live off the land like Moon does. His detailed depictions would indicate that he knows a lot about it. I'm also curious as to why Key chose to set this story in the aftermath of the Vietnam War. Was it just a convenient time period to set the story? Was he inspired by a specific event from the news? LUCKILY, there's a handy Q&A linked on Key's website that answers all my questions.

There is some violence, including violence against the constable (who totally deserved it, but that's neither here nor there). Moon's definitely got his own view of right and wrong and he's not always concerned with who he hurts, as long as he can be free. There are also some incidents that might be disturbing for younger readers, like Moon burying his own father and his friend's father getting drunk and driving them around. Even though Moon's only 10, he's going through some pretty heavy stuff. Kids who know something about the Vietnam War will quickly understand why Moon's father might act the way he does, although it's eventually explained somewhat.
Abby at 10:45 AM
Share
‹
›
Home
View web version