My Literacy Lunch Comes to an End

Today was the last day of my stint doing Literacy Lunches at a local elementary school. I sped read through the last 10 chapters and got it all wrapped up in the time allotted (go me!). Then at the end I had time to do a drawing for couple of free books and I gave out High School Musical 2 bookmarks (quite a hit). The free books came from Scholastic. Apparently we placed such a large order that they let my boss choose a package of free books.

The kids got really excited about the drawing and I only wish we had enough free books that I could have given everyone a prize. Still, I think they were happy with the bookmarks and it was nice to have a little something for everyone. (Although I am firmly in the camp of reading-should-be-its-own-reward...We have a bit of an issue with prizes come Summer Reading time... but that's a post for another day.)

ANYhoo. I asked the kids how they had heard of Whittington because I was a bit surprised that they had picked it and they seemed so very excited about this book that I hadn't even really known about. They said that their school librarian had booktalked several books to them and everyone had liked the sound of Whittington the best. So, take heed, dear booktalkers. The kids ARE listening. (Quite a relief to me, as I'm slated to booktalk to a class in this very school in two weeks...) 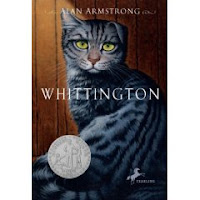 It got a starred review from SLJ, won a Newbery Honor, and yet somehow it slipped under my radar. I have to admit that it's not my favorite book, but the kids were quite excited about it and they followed along and clapped at the end.

Incidentally, I discovered that Alan Armstrong has written another book, Raleigh's Page. It's on the Anderson's Mock Newbery list.

Looking for readalikes for Whittington? I would suggest Charlotte's Web for the dynamic of the barnyard animals, and Ben and Me for another story about animals helping people to prosper. The novel is based on the English folktale Dick Whittington and his Cat, of which Marcia Brown has a version. It might be worth tracking down for kids who want to know more about the original story.

PS: This has absolutely nothing to do with Whittington or library programs, but I like the results, so I'll post my Harry Potter Personality Test: