Book Review: Song of the Sparrow 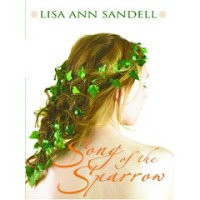 Song of the Sparrow by Lisa Ann Sandell. (Grades 7+)

In honor of Poetry Friday, I thought I'd share my thoughts on the latest verse novel I've read. Okay. I must confess that I don't totally get this genre. I suppose I like it as much as the next person, but if I am completely honest, one of the reasons I like it is because you can read big, thick books really quickly if they're written in verse. That's probably not how you're supposed to read them, but... oh, well.

That said, I must say that I enjoyed this book (though I think I would have enjoyed it just as much had it been written in prose). Song of the Sparrow is a retelling of the Arthurian legend of Elaine of Shalott. I came to the book with pretty much zero knowledge of Arthurian legend.

Elaine is a teenage girl who lives with her brothers, father, and a couple hundred other men at a battle camp in England during the Dark Ages. Her mother died when she was young and she's been raised without a lady's hand. Elaine likes her life among the men. She sews for them and gathers healing plants. She swims in the lake and knows the forest like the back of her hand. It's the only life she's ever really known. And for as long as she can remember, Elaine's been in love with Lancelot. When a lady shows up at the camp betrothed to Arthur, Elaine thinks she will finally have a friend. Unfortunately, Gwynivere seems to want nothing to do with her... and what's worse is the way she looks at Lancelot... and the way he looks back at her...

Although the story has a strong element of romance, Elaine's no swoony shrinking violet. She's pretty kick-ass. Lisa Ann Sandell says in her author's note that she wanted to re-imagine the story of Lady Shalott with strong female characters. She's done just that. Not being familiar with the legends on which the story is based, the first thing I wanted to do when I finished Sandell's book was to run out and read all the legends. Luckily, Sandell provides an awesome author's note with background on the Arthurian legends, the debate over whether Arthur ever actually lived, and a great list of books for continued reading. I am a huge sucker for author's notes. I love them. I want to marry them. They make me happy.

So, yes. This is a great book to give to your teens looking for novels in verse or fantasy with strong women. I'd even venture that the romance element is strong enough to recommend it to your Twilight fans, though Elaine is much more kick-ass than Bella (I hate to say this, but it's true).

Song of the Sparrow has also been reviewed at Becky's Book Reviews and Wands and Worlds.
Abby at 9:30 AM
Share