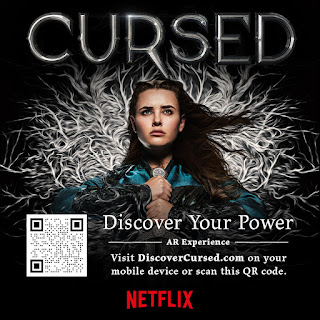 Have a fan of the new Netflix show Cursed, based on the YA book by Thomas Miller, illustrated by Frank Miller, in your house? This retelling of Arthurian legend asks the question: what if the sword Excaliber  had chosen a queen instead of a king? Nimue, the Lady in the Lake, is the starring role in this beautiful fantasy show. Outcast for her ability to use magic and on her own after religious zealots raze her village, Nimue is entrusted with a sword and told to deliver it to Merlin. But the way will not prove easy.
So if you enjoyed this show and/or the book it's based on, what should you read next? I have some ideas.
The Guinevere Deception by Kiersten White (Delacorte, 2019). This new series starter is another reimagining of Arthurian legend featuring a strong female lead, focusing on Guinevere's early days. Readers and viewers who are intrigued by fresh takes on Arthurian legend may enjoy this one.
Once and Future by Amy Rose Capetta & Cori McCarthy (Little, Brown, 2019). Here's another recent King Arthur remix, this time set in space. This one also features a strong female lead as King Arthur is here reincarnated as seventeen-year-old Ari, a female king trying to stop a corrupt government with the help of teenage Merlin.
Seven Endless Forests by April Genevieve Tucholke (Farar, Straus, & Giroux, 2020). Viewers and readers who love strong female-led fantasies may also enjoy this richly detailed quest story, loosely based on Arthurian legend. This is a standalone companion book to The Boneless Mercies, which is a female-led take on Beowulf, so that may be another title to seek out if strong heroines and literary retellings are your thing.
Have you watched Cursed or read the book? What did you think?
Abby at 9:15 PM
Share
‹
›
Home
View web version