A Strange Place to Call Home 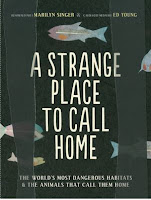 A Strange Place to Call Home: The World's Most Dangerous Habitats and the Animals That Call Them Home by Marilyn Singer, illustrated by Ed Young. Grades 4-6. Chronicle Books, 2012. 44 pages. Review copy provided by my local library.

The inner sanctum of a cave, too dark for eyes to be useful. Deep inside a glacier, surrounded by ice. High on the mountains with little shelter from weather and wind. In the middle of a desert, buffeted by sandstorms.

These are some of the dangerous places in which animals have adapted to live, and which are featured in Marilyn Singer's poems.

Here's where I give you a caveat. I'm approaching this review from a nonfiction standpoint. WorldCat gives this book the subject heading of Animals -- Habitations -- Juvenile literature. The book's subtitle leads me to believe it's meant as an informational book. This review might be very different if I approached it as a poetry book.

And this book was a definite miss for me. It's much better suited to be marketed as a poetry book, not an informational text, down to the fact that the only resource for further research is a link to a website on poetry forms.

Spreads feature a poem about an animal living in a dangerous environment and an illustration by Caldecott-winning-illustrator Ed Young. Some poems have more information than others. They're done in a variety of formats and it's certainly intriguing to link an informational book with various forms of poetry. This book should be Common Core gold, but I found the informative aspect of the book to be weak.

This book could work much better as a nonfiction text if facts (even brief facts) had accompanied each spread, not been grouped together at the end notes, particularly for the briefer poems. The illustrations, too, varied widely in their quality (a particular least favorite was the insane-looking mountain goat) and for the most part served this informational text poorly. For some animals, like the spadefoot toads seen from above, it's impossible to discern their actual shape from these illustrations. With many of these creatures so rarely seen and animals many kids may not be familiar with, photos included with the end notes would have gone a long way.

Although facts are presented in the end notes (including the Latin names of the animals and the geographic area in which they live), no sources are cited and no author's or illustrator's note is included. A page with information about poetry forms, including listing the poetry forms used for some of the poems in the book, is included in the back matter.

Pick up this book if you're looking for a poetry book featuring different poetry forms. It could also be supplemental material to a unit on animal habitats and it may inspire students to do further research on the unusual animals discussed. But make sure you have other resources available for students, since this book provides no guidance on where to look for information.

And hey, it's Nonfiction Monday, and Travis (one of our favorite guybrarians) is hosting over at 100 Scope Notes. Do go check it out!
Abby at 7:11 AM
Share
‹
›
Home
View web version