Fall Storytime: In the Jungle

This week, we did a jungle storytime and it was super fun! This is a great theme because there are TONS of books to choose from and you get to talk about animals a lot, which kids tend to love. Here's what we did:

Memory Box: This week's Memory Box item was a large plastic ant from the book Over in the Jungle: A Rainforest Rhyme by Marianne Berkes.

Book: We All Went on Safari: A Counting Journey Through Tanzania by Laurie Krebs. I explained that Tanzania is a country in Africa and asked the kids to help me identify the animals as we counted through the book. The book includes the number words 1-10 in Swahili, which might be fun to share with your kids. 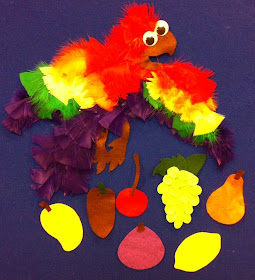 Book: Over in the Jungle: A Rainforest Rhyme by Marianne Berkes. This is another one with great vocabulary words. I love Jeanette Canyon's polymer clay illustrations. I also love any book you can sing, as that mixes things up a little bit.

Book: If You're Happy and You Know It: Jungle Edition by James Warhola. The kids had been sitting for awhile at this point, so I had them stand up and do the actions as I sang this book. I didn't do all the spreads, just a few to help them get their wiggles out. Their favorite was "If you're happy and you know it, give a ROAR!" 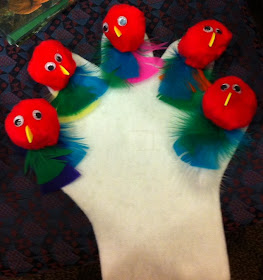 Rhyme: Five Little Parrots. My group was awesome and attentive today, so we did the whole rhyme, counting up and then back down.

Felt Song: We're Going to the Jungle! I took this idea from Mel's Desk and printed out pictures of jungle animals (found using Google image search). We sang this song to the tune of "The Farmer in the Dell":

Once I had all the pictures up on the board, we talked about them a little bit. We talked about which animals were big and which were small, which animals had fur and which did not, and what the animals eat. (I made sure to do some research and have some notes with me so I could tell them correctly!) 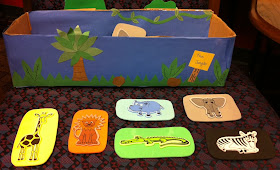 Activity: Jungle Animal Box. This is a prop that Miss T made for our Toddler Time group. I passed out the fun foam animals and sang a little song. As I called each animal, the kids who had that animal came up and put their animal "in the jungle" (i.e. in the box...).

(To the tune of "Do You Know the Muffin Man?" because it's the only tune I can ever think of when I'm on the spot...!)

Craft: This week's craft packets had a "P is for Parrot" craft, found via Pinterest. We included die-cut lowercase p's, a small piece of construction paper for a background, feathers, and a google eye.

If you don't have or don't like any of these books, consider using some of the following:

Five Little Monkeys Sitting in a Tree by Eileen Christelow
Hilda Must Be Dancing by Karma Wilson
I'd Really Like to Eat a Child by Sylvianne Donnio
If I Were a Jungle Animal by Amanda Ellery
Jazzy in the Jungle by Lucy Cousins
Roar!: A Noisy Counting Book by Pamela Duncan Edwards
"Slowly, Slowly, Slowly" Said the Sloth by Eric Carle
We're Roaming in the Rainforest by Laurie Krebs
The Wheels on the Bus by Jane Cabrera (featuring jungle animals!)