A couple weeks ago, I was chatting with one of our regular tween patrons and she mentioned that she really wanted to read the book A Child Called "It" by David Pelzer. That was the last straw: for years as I've worked in libraries and bookstores, this title has been continually in demand by adult, teen and tween patrons alike. It was time for me to read it and see what all the fuss was about.

I confess that I only made it about halfway through because it was just too hard for me to read about the awful things being done to this child. I respect anyone's right to read and enjoy this book (and I understand that it may be a necessary book for many teens and adults who have been through abusive situations), but it just wasn't for me. Knowing the incredibly popularity of this book got me thinking about A Child Called "It" as a gateway drug of sorts - the kind of book that can captivate reluctant readers. So today, I'm taking a page from The Reclusive Bibliophile's book and I'm going to do a list of readalikes. (Be sure you check out her If You Like feature for some great lists of books and movies.)

If You Like A Child Called "It", Check Out These Books

Living Dead Girl by Elizabeth Scott. Alice was kidnapped at the age of 10 when she was on a class field trip to the aquarium. She's now lived with Ray for five years, enduring unspeakable things. Ray starves her in an attempt to keep her small and young-looking. He promises her that if she ever tries to run, he will kill her parents. And then he tells her to find him a new girl, a girl that Alice can teach to please him.

The Rules of Survival by Nancy Werlin. "For Matt and his sisters, life with their cruel, vicious mother is a day-to-day struggle for survival. But then Matt witnesses Murdoch coming to a child's rescue in a convenience store, and for the first time, he feels a glimmer of hope. When, amazingly, Murdoch begins dating Matt's mother, life is suddenly almost good. But the relief lasts only a short time. When Murdoch inevitably breaks up with their mother, Matt knows he needs to take action. But can he call upon his hero? Or will he have to take measures into his own hands?" (Publisher summary quoted from GoodReads.)

Split by Swati Avasthi. Ever since his older brother left, Jace's dad's abuse has gotten worse and worse. Jace steps up and tries to take as many of the beatings as he can, in order to spare his mom, but one night things go too far and his dad kicks him out. Jace has nowhere to go except to track down the brother who abandoned him. Together, Christian and Jace must figure out how to find peace and how to rescue their mom... if she'll let herself be rescued.
Boy Toy by Barry Lyga. When Josh was 12, he was sexually abused by his history teacher. It's messed up everything for him. Her detailed confession made its way on to the Internet, so now everyone knows exactly what happened between Josh and his teacher. And now, six years later, she's getting out of jail.

Burned by Ellen Hopkins. "Raised in a religious -- yet abusive -- family, Pattyn Von Stratten starts asking questions -- about God, a woman's role, sex, love. She experiences the first stirrings of passion, but when her father catches her in a compromising position, events spiral out of control. Pattyn is sent to live with an aunt in the wilds of Nevada to find salvation and redemption. What she finds instead is love and acceptance -- until she realizes that her old demons will not let her go." (Publisher summary quotes from GoodReads.) And also check out Ellen Hopkins' other books.
The Burn Journals by Brent Runyon. "In 1991, fourteen-year-old Brent Runyon came home from school, doused his bathrobe in gasoline, put it on, and lit a match. He suffered third-degree burns over 85% of his body and spent the next year recovering in hospitals and rehab facilities. During that year of physical recovery, Runyon began to question what he’d done, undertaking the complicated journey from near-death back to high school, and from suicide back to the emotional mainstream of life." (Publisher summary quotes from GoodReads.)

Sickened: The True Story of a Lost Childhood by Julie Gregory. Throughout her childhood, Julie was told that she was sick. She was starved, beaten, and taken out of school for doctor's visits and hospital stays. Her mother insisted that every possible test be done (including invasive ones), in order to "get to the bottom of this". Julie was punished if she didn't go along with the symptoms her mother told the doctors she had. This is Julie's story of her childhood and how she finally broke free.
For tweens:

Okay for Now by Gary D. Schmidt. It's 1968 and fourteen-year-old Doug Swieteck has just moved to a new town with his family. Life's not easy for Doug there. No one expects much of him or his family and Doug never knows what to expect from his father, who flies violently off the handle at the smallest thing. Two things help him get by: the book of Audubon prints at the town library (and the librarian who's helping Doug learn to draw them) and Lil Spicer, a feisty girl in his class who becomes Doug's unlikely ally. As Doug tries to navigate his eighth grade year and the sides of his personality that would have him act just like his violent father and brothers, he's just hoping that things will turn out okay... for now.
What Jamie Saw by Carolyn Coman. What Jamie saw was his mom's boyfriend throwing his baby sister across the room. Luckily, Jamie's mom was quick enough to catch her and the three of them left that night. This gem of a book tells what happened after the incident and how Jamie and his mom begin to conquer their fears and put their lives back together. 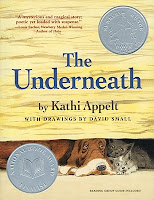 The Underneath by Kathi Appelt. "A calico cat, about to have kittens, hears the lonely howl of a chained-up hound deep in the backwaters of the bayou. She dares to find him in the forest, and the hound dares to befriend this cat, this feline, this creature he is supposed to hate. They are an unlikely pair, about to become an unlikely family. Ranger urges the cat to hide underneath the porch, to raise her kittens there because Gar-Face, the man living inside the house, will surely use them as alligator bait should he find them. But they are safe in the Underneath...as long as they stay in the Underneath." (Publisher summary quoted from GoodReads.)
What other books would you recommend for teen or tween fans of A Child Called "It"?
Abby at 11:07 AM
Share