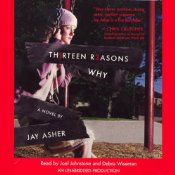 When I took my vacation trip to Iowa, one of the audiobooks I brought with me was Thirteen Reasons Why by Jay Asher (narrated by Debra Wiseman and Joel Johnstone - full details below). The teens at my library were going crazy for it over the summer, so I decided I needed to pick it up.

The story starts with our protagonist Clay receiving a set of cassette tapes in the mail. Upon listening to them, he discovers that the tapes were recorded by Hannah Baker, a classmate he had a crush on. She committed suicide a couple of weeks earlier and the tapes are targeted for certain students, explaining exactly what role they had in her decision.

Hannah Baker was bullied. People made a lot of assumptions about her and few knew who she really was, how she really felt about things. The tapes explain everything as Hannah saw it, detailing her slide further into depression.

I can see why teens like this book. It's dramatic. It's gripping. It explores a situation to which many teens can relate - rumors starting and snowballing and getting out of control. I was definitely hooked by Hannah's story and by Clay's reaction to her story. But somewhere in the middle it all got to be a little too much. It was a little too melodramatic and it stretched my suspension of disbelief. I also thought that it was pretty cruel of Hannah to send out these tapes like she did. Frankly, it made me lose some of my sympathy for Hannah and then the rest of the book was kind of hard to swallow.

The audio production was well done and I think that both Debra Wiseman and Joel Johnstone were well-chosen. In fact, listening to this book on audio might make the story even more effective since you're listening to Hannah narrate her story, just as Clay is listening to her. Both read clearly and with the requisite emotion for these intense roles. I probably wouldn't have read the whole book if I had been reading instead of listening. 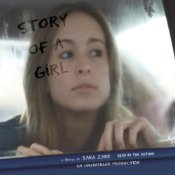 When I got back from Iowa, I was talking about this book with a couple of fabulous librarians on Twitter and my good friend Angie said something to the effect of "If you want a great book about truth, read Story of a Girl by Sara Zarr." I take recommendations from Angie very seriously, so I immediately sought out the audiobook Story of a Girl, written and narrated by Sara Zarr.

In Story of a Girl, we again have a teen girl who is haunted by rumors and they affect everything she does. Deanna Lambert was 13 when her dad caught her with her 17-year-old boyfriend and everything changed. Deanna used to be close to her father, but now she's 16 and her father can hardly look at her. He completely judges her based on that one mistake. Deanna's not seeing that guy anymore. She's not doing anything wrong, but she's still treated by her father and the kids at school like she's bad news.

Story of a Girl is not over the top. In fact, it's pitch-perfect. Deanna's a believable and likeable character who's just trying to get past her past. She knows she made a mistake, but it's been blown all out of proportion. She even has trouble getting a summer job because people in her small town have heard rumors about her. But Deanna perseveres, determined to turn things around. I especially like that Sara Zarr sets the story in a lower-class family. Many teens are going to see themselves or someone they know or someone they've heard rumors about in this story.

Sara Zarr does a nice job of narrating her own work. Authors narrating audiobooks... well... sometimes it's just not good at all. Sara Zarr doesn't voice characters, the reading's not flashy, but Sara Zarr, narrator, gets out of the way and lets Deanna's words speak for themselves. The first-person point of view lends itself nicely to the audio format anyway and the listener knows she can trust Sara Zarr to get the inflections and tone right because, well, she wrote it.

Either of these books would make great discussion books for teens. Both of them are about kids who are seen a certain way by their peers and how rumors and hearsay can be terribly destructive. They're about looking for the truth of things and not settling for rumors because you never know what you might be missing. And they both make great listens.

Story of a Girl, written and narrated by Sara Zarr. Grades 9+ Listening Library, 2008. 4 hours and 47 minutes. Review copy provided by my local library.

Hey, I'm an Audible affiliate, so if you purchase things after clicking on the links here, I may get a small commission!
Abby at 7:11 AM
Share
‹
›
Home
View web version