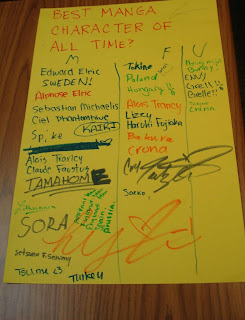 Last week we had the second meeting of our library's new Anime Club! You guys, it went like gangbusters again. I'm so happy we're doing this! We had 27 teens, about half of whom came last month and half of whom were new. Some of the kids who came last month came back and brought friends with them (huzzah!). We're going to continue to meet every month and I'm interested to see what the turnout will be next month after school's started back up...

We ran Anime Club much the same this time as we did last time. I brought a selection of anime movies/shows and we voted on what to show on the big screen. Since we watched something so girly last time, I promised the guys they would have first choice this time. This time, I also brought down a couple of laptops so that kids could put in something different and watch it if they wanted to. That really worked and both laptops were in use the entire time.

We brought down some games, but the kids weren't too interested in the ones we had. We did have a group playing Magic (or something similar), which they had brought from home. We're looking into some different/cooler games to buy for the teen area (suggestions welcome! The coolest thing we have is Apples to Apples, which the teens love, but that's pretty much the only game we have that they love...).

One fun thing I did this time around was to start the paper pictured above, which the teens added to all evening long. They also flipped it over and started their own (Best Yaoi Pairings, and yes I had to look up what that was).

The teens did not seem particularly interested in watching the anime we were playing on the big screen, but they had a blast hanging out with their friends (and hopefully making some new friends). Again, this was super easy to run, cheap, and very well-attended. I'm already looking forward to next month!
Abby at 7:11 AM
Share