A Nation's Hope: The Story of Joe Louis 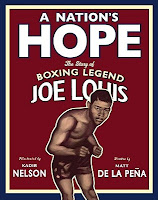 Joe Louis was an African-American boxer in the 1930s when black people and white people stayed away from each other.  But in 1938, when Joe Louis faced German boxer Max Schmeling, it wasn't just black Harlem that was cheering him on, but the entire country.

I love Matt de la Peña.  His words bring the reader right into the story of Joe Louis's fight and why it was important.  I love Kadir Nelson.  His paintings are phenomenal, as readers have come to expect.  The two of them together have created something special here - a story about a boxer that's much more than a story about a boxer.  This is a story about a nation on the precipice of war. In Joe Louis, the country found a figure behind which black people and white people could come together.  They cheered together.  You can feel the tension that the nation felt as they stared down the Germans starting to do things over there in Europe.  Even the last page, the resolution of the story, is dark and wary, cognizant of the battles to come, even as this fight had been won.

WHICH IS WHY IT TOTALLY SUCKS THAT THERE IS NO BACK MATTER WHATSOEVER.

I picked this book up off the new books cart at my library and as I paged through I began to smile.  I went back and checked the copyright date and my smile grew as I realized that this book would be eligible for this year's awards.  And then I got to the end where I found no back matter whatsoever.  No resources, no bibliography, no timeline of Joe Louis's life, no information about the impending World War.

And to be completely honest, it ruined the book for me.  I've said it before and I'll say it again: How can we expect kids to cite sources if people writing books for them are not citing sources?  I believe that back matter like bibliographies, timelines, biographical information, author's notes, and/or illustrator's notes are absolutely essential in children's nonfiction.  It greatly disappoints me when they're not there.

All I can say is: sigh.  Use this book for the brilliant art and compelling story, but bring additional resources because you won't find any back matter here.

It's Nonfiction Monday, so head on over to LL Owens where you will hopefully find lots of books that do cite their sources.  :)
Abby at 7:11 AM
Share
‹
›
Home
View web version