Giveaway: A Discovery of Witches

The giveaway is now closed. Thanks to all who entered!

Okay, I don't normally hold giveaways for books that I haven't read, but, well, I'm doing that today. A Discovery of Witches by debut author Deborah Harkness is technically published for adults, but it's got loads of YA appeal and I've been hearing some really good things about the book. It was a February 2011 Indie Next pick and it's been getting tons of great reviews all over the place.

Here's a little bit about the book from the author's website:
When historian Diana Bishop opens a bewitched alchemical manuscript in Oxford’s Bodleian Library it represents an unwelcome intrusion of magic into her carefully ordinary life. Though descended from a long line of witches, she is determined to remain untouched by her family’s legacy. She banishes the manuscript to the stacks, but Diana finds it impossible to hold the world of magic at bay any longer.

For witches are not the only otherworldly creatures living alongside humans. There are also creative, destructive daemons and long-lived vampires who become interested in the witch’s discovery. They believe that the manuscript contains important clues about the past and the future, and want to know how Diana Bishop has been able to get her hands on the elusive volume.

Chief among the creatures who gather around Diana is vampire Matthew Clairmont, a geneticist with a passion for Darwin. Together, Diana and Matthew embark on a journey to understand the manuscript’s secrets. But the relationship that develops between the ages-old vampire and the spellbound witch threatens to unravel the fragile peace that has long existed between creatures and humans—and will certainly transform Diana’s world as well.

One lucky winner will receive a copy of A Discovery of Witches and a set of buttons: 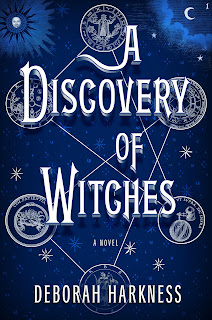 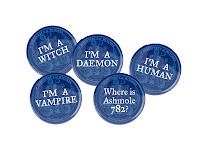 This giveaway is open to US residents only and I will accept entries through next Tuesday, May 3! To enter, just fill out the form below. One entry per person, please.
The giveaway is now closed. Thanks to all who entered!!
Abby at 7:11 AM
Share
‹
›
Home
View web version