Into the Woods at Storytime

For this week's storytime we went into the woods with stories about all kinds of woodland creatures!  Here's what I did:

Opening Song:  "Shake Your Sillies Out" by Raffi

Memory Box Item:  This week's Memory Box item is a spider from Raccoons and Ripe Corn by Jim Arnosky.

Book:  Raccoons and Ripe Corn by Jim Arnosky.  This is a quiet sort of book with muted, realistic pictures.  I think it would be great for one-on-one sharing or for certain groups, but it did not quite do it for my group this week.  Then again, I tend to prefer more dramatic, rambunctious stories, so maybe I was not the best reader for this book.

Book:  The Little Mouse, the Red, Ripe Strawberry, and the Big, Hungry Bear by Don & Audrey Wood.  This one's more my style, and I had a mom ask me to tell her the title again after storytime so they could check it out.  :) 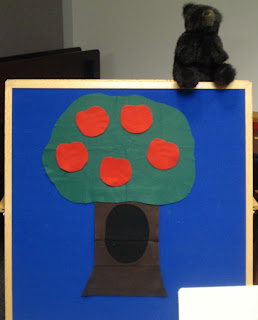 Rhyme:  Five Red Apples.  I explained that the bear in the last story liked eating strawberries, but I had a bear friend who loooved eating apples!  I put up the five red apples and as we took away one in the rhyme, I had my bear puppet snatch it off the felt board and gobble it up.

Five red apples, sweet to the core.
Bear came and ate one and then there were four.

Four red apples, sitting in a tree.
Bear came and ate one and then there were three.

Three red apples, one for you and you and you.
Bear came and ate one and then there were two.

Two red apples, shining in the sun.
Bear came and ate one and then there was one.

One red apple, left all alone.
Bear came and ate one and then there was none.

After he eats all the apples, I have my bear puppet fall asleep and snore until the kids wake him up.

Activity:  Woodland creatures.  Miss T in our department always puts together a color activity for her Toddler Time and I borrowed her woodland creatures.  She decorated a box to look like "the woods" and I passed out a woodland creature to each of the kids.  I told them we were going on a hike and when we spotted each animal, I would ask them to come up and put it in the box.  We had owls, deer, chipmunks, rabbits, squirrels, skunks, bears... and lots more!  I like this activity because it helps them learn about taking turns and it gets them up and moving around a little bit.

Song:  Head, Shoulders, Knees, and Toes.  It doesn't have anything to do with our theme, but it's my favorite and I needed something to get some of their wiggles out.  Note:  this is okay!  It's okay to include things that aren't on your theme!  In my mind it's more important to have a fun storytime than to religiously stick to a theme.

Book:  Acorns Everywhere! by Kevin Sherry.  I thought I would give this one a try because sometimes stories can surprise you by being great readalouds, but this one flopped.  I thought the kids would either be really into it and love it or they would not get it at all, and, unfortunately, this week it was the latter.  I think this might work for older kids, but it went over the heads of my preschoolers.  A different book would have been a better choice.  Ah, well.  You live and learn! 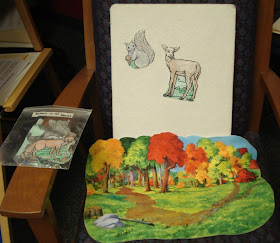 Felt:  Animals in the Woods.  As I said the rhyme, I placed each animal on the felt board.  At the end when the bear comes and the animals hid, I slapped on a forest scene felt piece over all the animals except the bear.  Here's the rhyme:

In the woods, there is a lot to see.
A small, gray squirrel lives in an old oak tree.
The spotted deer come out to play
Where furry fox likes to stay.
The soft little rabbits lounge and laze
While the sleepy owl flies through the haze.
The masked raccoon loves to eat.
The tiny chipmunks are so sweet.
Black and white skunks walk in a line.
The beavers are working together so fine.
A big black bear walks out of his cave
And all of the animals were not brave,
SO THEY HID!


Ending Song:  Do You Know What Time It Is? 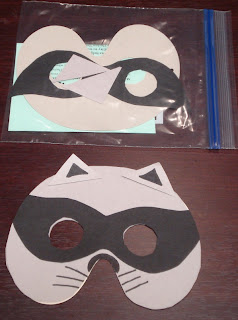 Take- Home Craft:  Raccoon masks.  We have dies for the mask shapes and we included all the pieces, so the kids just have to glue the pieces together and draw on a nose and whiskers.  Bonus:  masks are great for encouraging dramatic play!


Alternate Books:  If you don't like or don't have some of the stories I used, here are some others you might consider:

Bear Wants More by Karma Wilson (or a different Bear book if you're in a different season!)
Raccoon Tune by Nancy E. Shaw (I should have used this one instead of Raccoons and Ripe Corn, probably)
Nuts to You by Lois Ehlert
Scoot! by Cathryn Falwell
A Whiff of Pine, A Hint of Skunk by Deborah Ruddell - I wouldn't read this collection of poems straight through, but a few poems sprinkled here and there would be grand!
Abby at 7:11 AM
Share