In My Mailbox is a weekly meme in which bloggers share the (bookish) contents of their mailboxes in an effort to get the word out about exciting new titles!  Here's what I got this week: 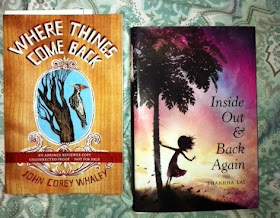 Where Things Come Back by John Corey Whaley (Atheneum, May 2011).  Summary from publisher:

Just when seventeen-year-old Cullen Witter thinks he understands everything about his small and painfully dull Arkansas town, it all disappears. . . .

In the summer before Cullen's senior year, a nominally-depressed birdwatcher named John Barling thinks he spots a species of woodpecker thought to be extinct since the 1940s in Lily, Arkansas. His rediscovery of the so-called Lazarus Woodpecker sparks a flurry of press and woodpecker-mania. Soon all the kids are getting woodpecker haircuts and everyone's eating "Lazarus burgers." But as absurd as the town's carnival atmosphere has become, nothing is more startling than the realization that Cullen’s sensitive, gifted fifteen-year-old brother Gabriel has suddenly and inexplicably disappeared.

While Cullen navigates his way through a summer of finding and losing love, holding his fragile family together, and muddling his way into adulthood, a young missionary in Africa, who has lost his faith, is searching for any semblance of meaning wherever he can find it. As distant as the two stories seem at the start, they are thoughtfully woven ever closer together and through masterful plotting, brought face to face in a surprising and harrowing climax.

I was pitched this book by the editor, who edited two books I reviewed and loved (Deadly by Julie Chibbaro and Nevermore by Kelly Creagh).  She said that she's really excited about WHERE THINGS COME BACK and that makes me excited about it, too!

Inside Out & Back Again by Thanhha Lai (HarperCollins, February 2011).  Summary from publisher:

For all the ten years of her life, Hà has only known Saigon: the thrills of its markets, the joy of its traditions, the warmth of her friends close by...and the beauty of her very own papaya tree.

But now the Vietnam War has reached her home. Hà and her family are forced to flee as Saigon falls, and they board a ship headed toward hope. In America, Hà discovers the foreign world of Alabama: the coldness of its strangers, the dullness of its food, the strange shape of its landscape...and the strength of her very own family.

This is a novel in verse by a debut author of color.  I started it last night and I'm already digging how Lai paints the Vietnamese landscape with her lush words.  Also: the cover!  Gorgeous!!
What did you get in your mailbox this week?
Abby at 9:47 AM
Share
‹
›
Home
View web version