It's Sunday and you are expecting In My Mailbox (hosted by Kristi of The Story Siren), but today I'm going to do something a little different.  As part of my ALA Midwinter recaps, I wanted to share with you the books I brought home in my suitcase.  I grabbed a ton of books at Midwinter, the majority of which are for my library kids and teens and our adult services department.  I've got several big boxes being mailed, but these are the books that I stuck in my suitcase because I couldn't bear the thought of them getting lost or damaged in transit!

(Links go to GoodReads for a plot summary!  My comments are in purple!) 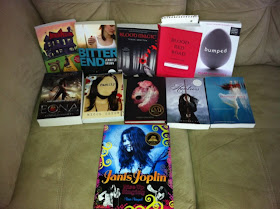 Aliens on Vacation by Clete Barrett Smith (Disney/Hyperion, May 2011).  Scrub isn't happy about leaving Florida and his friends to summer with his grandmother in "Middle of Nowhere", Washington.  When he arrives at her Intergalactic Bed & Breakfast, he isn't surprised by its 60s-meets-Star-Wars decor, but he is surprised by the weird-looking guests.  It turns out that each room in the inn is a portal, and his grandma is the gate-keeper, allowing aliens to vacation on Earth. I honestly had passed by this one at the booth, but at the Disney/Hyperion preview, one of the editors read aloud from it and I was laughing out loud and HOOKED on the voice.  This one sounds like an awesome, funny boy book.  Also, this is a 2011 middle grade debut!
Bitter End by Jennifer Brown (Little, Brown, May 2011).  After I read Hate List last month, I HAD TO get my hands on Jennifer Brown's newest.  I have it on good authority that it is fabulous!
Blood Magic by Tessa Gratton (Random House, April 2011). This is a 2011 debut that everyone was buzzing about.  Witches and magic!
Blood Red Road by Moira Young (Margaret K. McElderry, June 2011).  Okay, I went to the Simon & Schuster booth and they were saying "This is our Hunger Games!" and I thought "Hmm.... not sure I believe that..."  When I found out at the preview lunch that they had only received the manuscript a month ago and they are already planning on releasing it in June because they couldn't wait, I was sold.  I started it on the plane and I'm about halfway through and WOW.  I am here to put this one on your radar.  LOOK FOR IT.
Bumped by Megan McCafferty (Balzer + Bray, May 2011).  I loved McCafferty's Jessica Darling books and I'm super intrigued to read her newest, a dystopian novel.
Eona by Alison Goodman (Viking, April 2011).  This is a sequel to Eon: Dragoneye Reborn and I have been waiting for it for YEARS!!!!  I am suitably excited.
Family by Micol Ostow (Egmont, April 2011).  This novel in verse is loosely based on the Manson Family murders.  Color me intrigued.
The Freak Observer by Blythe Woolston (Carolrhoda Lab, August 2010).  The 2011 Morris Award winner!  I will be completely honest and say that I was not sure I had any interest in reading it until I heard Blythe's fantastic and eloquent acceptance speech at the Morris reception.  After I heard that, I had to pick up her book.  And look!  Mine has the shiny new sticker and it's signed!  Woooo!
Huntress by Malinda Lo (Little, Brown, April 2011).  I loved Ash and I'm excited to read the prequel!  Hooray for kick-ass girls and GLBT fantasy!
Imaginary Girls by Nova Ren Suma (Dutton, June 2011).  I loved Dani Noir, which was nominated for a Cybils Award during my year on the middle-grade nominating panel and when I heard that Nova Ren Suma had a new book coming out, I had to find it! Nancy Werlin blurbs it, saying "It's the book everyone will be dying to talk about."
Janis Joplin: Rise Up Singing by Ann Angel (Amulet Books, October 2010).  After the Morris reception, the honored authors were signing copies of their books for attendees.  I only picked up two of them and Janis Joplin was one I had to have (even though my suitcase was overflowing at that point...).  I've already read and reviewed this one and I loved it.  My ARC is in black and white, so I love having a color copy (makes a big difference!). 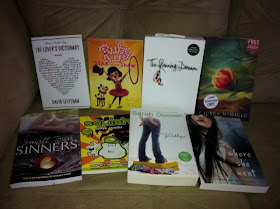 The Lover's Dictionary by David Levithan (Farrar, Strauss, & Giroux, January 2011).  Y'all know that David Levithan is my gay husband, so of course I had to pick up his adult debut.  I am so, so excited about this one.  I've loved David's YA books.  And get this, he signed to "To Abby - With love..." which I'm sure is how he's signing all of them, but a little part of me believes that it's just for me. :) *swoon*
Ruby Lu, Star of the Show by Lenore Look (Atheneum, February 2011).  I love the Ruby Lu books - great easy chapter books featuring an Asian-American protagonist.  I am not sure how I feel about the repackaging and new illustrations, but I'll report back on that.
The Running Dream by Wendelin Van Draanen (Knopf, January 2011).  The plot reminds me a little bit of Izzy Willy-Nilly by Cynthia Voigt, which I read as a teen and loved.  It might be really interesting to reread that book and see how they compare.
Shine by Lauren Myracle (Amulet, May 2011).  Okay, funny story.  Kelly got Lauren Myracle to sign my fingernails.  They are both the bestest.
Small Town Sinners by Melissa Walker (Bloomsbury, July 2011).  Just... look at that cover.  Gorgeous.  Kelly's love for Melissa Walker has gotten me really excited about this one!
Squish: Super Amoeba by Jennifer L. Holm and Matthew Holm.  (Random House, May 2011).  BABYMOUSE FOR BOYS!!!!!  Need I say more?  I've read this one already and it's super awesome.  Can't wait to share it with the kids at my library!!!!!
What Happened to Goodbye by Sarah Dessen (Viking, May 2011).  I am a huge fan of Sarah Dessen.  She's one of the first YA authors I read when I was first starting to get into YA.  And I know at least one teen in our teen advisory group who is going to *flip* when I give her this!
Where She Went by Gayle Forman (Dutton, April 2011).  Not only did I read and love If I Stay, but our teens read it as one of their book club books and I think they're going to be really excited to read the companion book.
Whew!  (Can you believe I got all that onto my carry-on luggage?!  Along with all my clothes?!)  I have definitely got some reading ahead of me...!
Abby at 12:01 AM
Share