Welcome to In My Mailbox, a Sunday roundup of all the wonderful books that appeared in my mailbox this week!  Kristi at The Story Siren has the roundup!

These books are review copies I've gotten over the past few weeks... 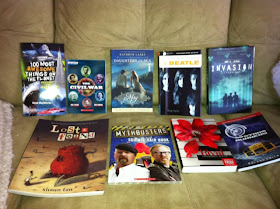 100 Most Awesome Things on the Planet by Anna Claybourne (Scholastic, January 2011).  Okay, 100 Most Dangerous Things on the Planet is the best book to booktalk EVER.  Whenever I talk it, kids are scrambling all over themselves to get their hands on it.  I am so excited that there's a new book in this vein!
The Civil War: Six Degrees Biographies by Aaron Rosenberg (Scholastic, January 2011).  This book combines six short biographies of people central to the Civil War.  While biography compilations don't seem to circ as well as individual biographies, this would be a good starting point for kids studying the Civil War.  The six people featured are Clara Barton, Mathew Brady, Frederick Douglass, Robert E. Lee, Abraham Lincoln, and George McClellan.
Daughters of the Sea: May by Kathryn Lasky (Scholastic, March 2011).  Mermaid book... The second in a series...
The Girl Who Became a Beatle by Greg Taylor (Feiwel & Friends, January 2011).  I love the Beatles!!!!  So of course when this one was pitched to me, I had to accept. :)
Invasion: A CHAOS Novel by Jon S. Lewis (Thomas Nelson, December 2010).  Aliens... Could be cool...
Lost & Found by Shaun Tan (Scholastic, April 2011).  I actually purposefully didn't pick this one up at ALA because it's a weird size and I thought it might mess up my mailing boxes, so I was happy to get this one in the mail last week!
Mythbusters Science Fair Book by Samantha Margles (Scholastic, January 2011).  This book looks so cool.  I haven't looked at it in detail yet, but if the experiments are feasible, this might be the perfect thing to motivate those reluctant science fair participants.
Rival by Sara Bennett Wealer (HarperTeen, February 2011).  This is a 2011 debut about dueling high school singers.  I won this on a GoodReads giveaway!  Hooray!
Storm Runners by Roland Smith (Scholastic, October 2010).  This one sounds action-packed and I have a feeling that my kids are going to scoop up this series!
And that was my mailbox this week!  I hope you had a great week!
Abby at 7:11 AM
Share