EPIC MAILBOX OF AWESOME!
Seriously.  I appreciate all the books I get in the mail, but this was a pretty epic week... Behold the awesome... (and then go over to The Story Siren and check out the roundup!) 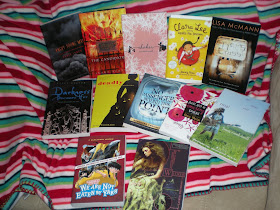 Lesse... what's in here... (Links go to GoodReads, where you will find plot summaries, etc.)
Angry Young Man by Chris Lynch (Simon & Schuster, February 2011).  I liked Lynch's Inexcuseable, and I definitely need to read more guy books.
The Candidates (Delcriox Academy #1) by Inara Scott (Hyperion, August 2010).  Paranormal + private school = I'm intrigued.
Choker by Elizabeth Woods (Simon & Schuster, January 2011).  2011 debut!!!  An aside: one of my roommates in college was named Elizabeth Wood.  I don't think that's the same person or else Liz has some splainin to do...
Clara Lee and the Apple Pie Dream by Jenny Han (Little, Brown, January 2011).  I actually picked up a copy of this at BEA, so I feel a giveaway coming on... It's a nice book!
Cryer's Cross by Lisa McMann (Simon Pulse, February 2011).  *squee!*  I looooved McMann's Wake and I've been looking forward to this one!  I have heard some mixed things, but I want to read for myself and see. :)  (PS: Several blogs have that countdown widget and OMG IT FREAKS ME OUT.)
Darkness Becomes Her by Kelly Keaton (Simon Pulse, February 2011).  2011 debut!!!  I think this is some kind of mythology retelling...
Deadly by Julie Chibbaro (Atheneum, February 2011).  I'm about halfway through this one and it is AWESOME!  It's set in 1906-07 (my favorite time period for historical fiction) and deals with a girl scientist's hunt for Typhoid Mary.
No Passengers Beyond This Point by Gennifer Choldenko (Dial, February 2011).  Very excited about this one because I really enjoyed her Al Capone books.  This looks like a departure from her other books - very cool!
Small Acts of Amazing Courage by Gloria Whelan (Simon & Schuster, April 2011).  Historical fiction with an English main character living in India in 1918!
Ten Miles Past Normal by Frances O'Roarke Dowell (Atheneum, March 2011).  Dowell has published middle grade before, but this is her teen debut.  I read the first page and it looks really great.  I actually received two copies of this, so I feel another giveaway coming on...
We Are Not Eaten by Yaks by G. Alexander London (Philomel, February 2011).  Looks quirky, and kind of Lemony Snickett-ish.
Wither by Lauren DeStefano (Simon & Schuster, March 2011).  2011 debut!!! I love the pretty cover!  I've been coveting this one since I saw it on Kristi's Books to Pine For back in August!
WHEW.  Epic.  So, how about you?  Anything epic in your mailbox this week?
Abby at 12:01 AM
Share
‹
›
Home
View web version