Happy Halloween!!
And welcome to In My Mailbox, a weekly meme (hosted by Kristi at The Story Siren) in which bloggers share the contents of the mailboxes! 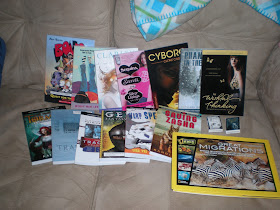 Okay, so I got a wonderful box from Scholastic and I got a really visually stunning National Geographic Kids title and if you look closely, you'll see two things there that aren't books.  THEY ARE HOPE'S ANTI-COMET PILLS from Selling Hope by Kristin O'Donnell Tubb, which I loooved!!!  And guess what??? Kristin's kicking off my NaNoWriMo author guest posts TOMORROW.  So stay tuned. :)
And now for the books:
Quest for the Spark by Tom Sniegoski and Jeff Smith (Scholastic, February 2011). - The Bone graphic novel series is super popular at my library.  I can't wait to share this one with the kids!
The Great Wall of Lucy Wu by Wendy Wan-Long Shang (Scholastic, January 2011).  - Here's a 2011 debut!
Clarity by Kim Harrington (Scholastic, March 2011). - This one's already getting some buzz on the YA blogs.  It's a 2011 debut about a teen psychic, looks good for fans of paranormal.
Sequins, Secrets, and Silver Linings by Sophia Bennett (Scholastic, January 2011).  - I'm excited for this one because they highlighted it at the Scholastic Librarian Preview.  This British import (published as Threads over there) is a 2011 US debut!
Cyborg by the McKissacks (Scholastic, February 2011).  -  POC science fiction!  This is the second book of the Clone Codes.
Phantoms in the Snow by Kathleen Benner Duble (Scholastic, February 2011).  -  I reviewed Quest by Ms. Duble during my YA Cybils year.  Here's a new historical fiction set during WWII (perennially popular time period).
Wishful Thinking by Alexandra Bullen (Scholastic, January 2011).  -  This is a sequel to last year's Wish, which I haven't read, but I might have to track it down!
The Book of Tormod: A Templar's Gifts by Kat Black (Scholastic, April 2011).  -  This is the second book in a trilogy, apparently.  Looks like something that'll appeal to my many kids who love fantasy.
Trapped by Michael Northrop (Scholastic, February 2011).  - GoodReads says "The Breakfast Club meets The Blizzard of the Century".  Dude, sign me up.
Shantorian (Trackers #2) by Patrick Carman (Scholastic, January 2011).
Geek Fantasy Novel by E. Archer (Scholastic, April 2011).  - Sounds hilarious!
Warp Speed by Lisa Yee (Scholastic, March 2011).  -  New Lisa Yee.  'Nuff said. (Yay!)
Saving Zasha by Randi Barrow (Scholastic, January 2011).  -  This is a children's 2011 debut, historical fiction set just after WWII.
Great Migrations by Elizabeth Carney (National Geographic Kids, October 2010).  -  The Great Migrations television event premiers on November 7 and this is a companion book to the mini-series.  (I wonder if I get the National Geographic Channel... hmm...)
And that's what was in my mailbox this week!  How about you?
Abby at 12:01 AM
Share
‹
›
Home
View web version