Welcome to In My Mailbox, a weekly meme where bloggers share the books that arrived in the mailbox, from the library, etc. in order to spread the word about new and fabulous books! Head on over to The Story Siren where Kristi has the roundup.

This week, I got some awesome books!!!
On Monday, I got an awesome shiny envelope... What could be inside? 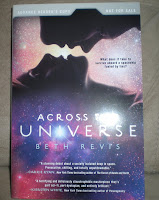 In the shiny envelope was Across the Universe by Beth Revis (Razorbill, January 2011).  I did my happy dance when this one showed up on my doorstep!  Why?  Well, read this summary from GoodReads:
Seventeen-year-old Amy joins her parents as frozen cargo aboard the vast spaceship Godspeed and expects to awaken on a new planet, three hundred years in the future. Never could she have known that her frozen slumber would come to an end fifty years too soon and that she would be thrust into the brave new world of a spaceship that lives by its own rules.

Amy quickly realizes that her awakening was no mere computer malfunction. Someone—one of the few thousand inhabitants of the spaceship—tried to kill her. And if Amy doesn’t do something soon, her parents will be next.

Now, Amy must race to unlock Godspeed’s hidden secrets. But out of her list of murder suspects, there’s only one who matters: Elder, the future leader of the ship and the love she could never have seen coming.

Awwwesome!!  And the cover is goooorgeous! 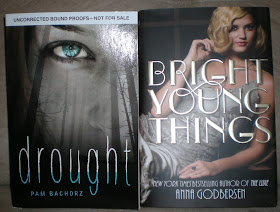 This week (in regular envelopes), I also got Drought by Pam Bachorz (Egmont USA, January 2011).  I'm excited for this one because I loved Pam Bachorz's first novel, Candor (Egmont USA, 2009).  In fact, I had this one on my look-for-at-BEA list, but alas, the pub date had been pushed back!  I'm very excited to have it!  Here's the plot summary from GoodReads:
Ruby Prosser dreams of escaping the Congregation and the early-nineteenth century lifestyle that’s been practiced since the community was first enslaved.

She plots to escape the vicious Darwin West, his cruel Overseers, and the daily struggle to gather the life-prolonging Water that keeps the Congregants alive and gives Darwin his wealth and power. But if Ruby leaves, the Congregation will die without the secret ingredient that makes the Water special: her blood.  So she stays.

But when Ruby meets Ford, the new Overseer who seems barely older than herself, her desire for freedom is too strong. He’s sympathetic, irresistible, forbidden—and her only access to the modern world. Escape with Ford would be so simple, but can Ruby risk the terrible price, dooming the only world she’s ever known?

Bright Young Things by Anna Godbersen (HarperCollins, October 2010).  I've been excited about this one since I heard it was coming out because I loved Ms. Godbersen's Luxe series!  I was so excited that I won a copy from a GoodReads giveaway that I completely forgot that I had preordered the book on Amazon, so I actually got 2 copies this week.  Rest assured, my copy was quickly donated to the Teen section at my library.  :)  Here's a plot summary from GoodReads:
The year is 1929. New York is ruled by the Bright Young Things: flappers and socialites seeking thrills and chasing dreams in the anything-goes era of the Roaring Twenties.

Letty Larkspur and Cordelia Grey escaped their small Midwestern town for New York's glittering metropolis. All Letty wants is to see her name in lights, but she quickly discovers Manhattan is filled with pretty girls who will do anything to be a star...

Cordelia is searching for the father she's never known, a man as infamous for his wild parties as he is for his shadowy schemes. Overnight, she enters a world more thrilling and glamorous than she ever could have imagined—and more dangerous. It's a life anyone would kill for...and someone will.

The only person Cordelia can trust is Astrid Donal, a flapper who seems to have it all: money, looks, and the love of Cordelia's brother, Charlie. But Astrid's perfect veneer hides a score of family secrets.

Across the vast lawns of Long Island, in the illicit speakeasies of Manhattan, and on the blindingly lit stages of Broadway, the three girls' fortunes will rise and fall—together and apart. From the New York Times bestselling author of The Luxe comes an epic new series set in the dizzying last summer of the Jazz Age.


And I got another package from Simon & Schuster with Dessert First and Just Desserts by Hallie Durand. 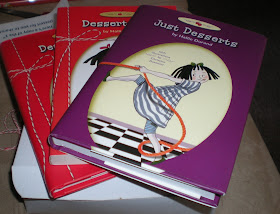 And that was my mailbox week!  Did you get anything exciting this week?
Abby at 7:11 AM
Share